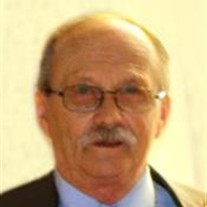 Marshall: Carlton Wendel, age 66, of Marshall, passed away on Friday, June 15, 2012 at the Doughtery Hospice House in Sioux Falls, SD. Funeral services will be held on Wednesday, June 20, 2012 at 3:00 pm at St. James Episcopal Church in Marshall. Interment will take place in the Marshall Cemetery with full military honors. Visitation will be held on Tuesday from 5:30 to 7:30 pm at the Hamilton Funeral Home. Carl Wendel was born on August 24th, 1945 in Crosby, N.D. to Harry and Anna Sylling Wendel. He graduated from Divide Country High in 1963, attended NDSU and graduated from Virginia Tech in 1973 with a B.S. in Animal Science. He was the county director of Yellow Medicine Country Farm Service Agency and completed 34 years of government service. Carl's was a life well lived. It reflected his great love of family, church, service to his country and nature. He was married to Charlotte (Reynolds) Wendel for 44 years. He lived to see all of his daughters married to caring men. He was an active member of St. James Episcopal Church, serving as lay reader and vestry member for several years. He was very proud of his military service in the U.S. Army. Carl served as an air traffic controller and forward observer in the DMZ in Korea and Cambodia in 1969. He loved camping and travel, visiting 49 states, 22 countries and 5 continents. He was a former R.C.A. Cowboy traveling extensively through the United States and Canada riding in the bareback bronco event. He opened his home to many troubled children. He hosted 8 foreign exchange students, was active in Big Brothers of Virginia and served as father figure to many children. Although ravaged with cancer, Carl walked his last daughter down the aisle on May 26th at Spearfish Canyon Lodge. His Oncologist called him “a remarkable man.” He is survived by his daughters Holly Isaac, Kristen Klingenberg and Danielle Gies, his wife Charlotte, three grandchildren, his brother Gary Wendel, and 16 Swedish cousins. He was preceded in death by his parents and one grandson. He was surrounded by love. May he rest in peace. Blessed Be The Memory of Carlton Wendel.

Marshall: Carlton Wendel, age 66, of Marshall, passed away on Friday, June 15, 2012 at the Doughtery Hospice House in Sioux Falls, SD. Funeral services will be held on Wednesday, June 20, 2012 at 3:00 pm at St. James Episcopal Church in... View Obituary & Service Information

The family of Carlton Wendel created this Life Tributes page to make it easy to share your memories.

Marshall: Carlton Wendel, age 66, of Marshall, passed away on...

Send flowers to the Wendel family.