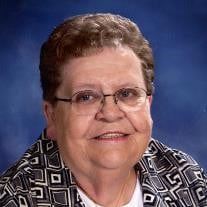 Carol Briggs, age 79, of Marshall, Minnesota, passed away on Wednesday, November 29, 2017, at her home in Marshall, Minnesota. Memorial Services are 1:30 p.m. Monday, December 4, 2017, at First Lutheran Church in Marshall. Interment will be at a later date in the Sunset Memorial Cemetery, Montevideo, Minnesota. Visitation will be held one hour prior to the service, from 12:30 – 1:30 p.m., Monday at the church. Carol Elizabeth Luschen was born February 10, 1938, to Fred and Betty (Gerdes) Luschen in Montevideo, Minnesota. She was baptized as an infant at Mount Olive Lutheran Church in Montevideo and later confirmed in her youth at Trinity Lutheran Church of Havelock. Carol attended elementary school in Montevideo and rural Maynard before graduating from the Maynard High School with the class of 1956. She moved around, living in St. Paul, California, and Oklahoma. It was there that she met and married Walter Briggs on July 4, 1970. The couple worked together as apartment managers in Oklahoma City, St. Paul, and finally in Marshall. Walter passed away in 1988 and Carol continued to manage until retiring in 1998 and moving to Hillman, MN. She returned to Marshall in 2002 and served on the Housing Commission Board and worked as a Foster Grandparent at Parkside Elementary. The students, her adopted grandchildren, brought much joy to her life. She was fun-loving and enjoyed time with others, especially if it included humor and laughter. She was an avid TV fan and reader and enjoyed playing cards and Bingo. Carol Briggs died November 29, 2017 in her Marshall, Minnesota, apartment at the age of 79 years, 9 months, and 19 days. Blessed be her memory. She is survived by immediate family members in Idaho: her daughter, Sarah Ludemann, former son-in-law, Ray Miles, 4 grandchildren, Kenny (Madison) Miles, Christie (Jessica) Miles, Zachary Miles, Katie Miles, a great grandson, Mathew Miles and 1 granddaughter of San Jose, California, Kimberly (Lawrence) Cummins. Also survived by siblings Nancy (Bill) Schuller of Montevideo, Bill (Rita) Luschen of Maynard; sister-in-law, Delores Luschen of Garrison; special friend and caregiver, Linda Runia of Marshall; dedicated nurse, Becky Holzheimer of Montevideo; nieces, nephews, other relatives, and friends. Carol was preceded in death by her parents, Fred and Betty Luschen; husband, Walter Briggs; sister, Lorraine (Calvin) Jaenisch; and brothers, Leonard Luschen and Douglas (Mar) Luschen.

The family of Carol Elizabeth Briggs created this Life Tributes page to make it easy to share your memories.

Carol Briggs, age 79, of Marshall, Minnesota, passed away on...

Send flowers to the Briggs family.