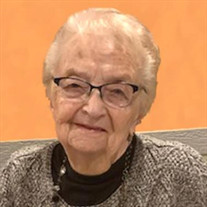 Carol Neels, age 87, of Marshall, Minnesota, died on Thursday, November 18, 2021, at the Avera Heart Hospital in Sioux Falls, South Dakota. Funeral Services will be held at 11:00 a.m. on Tuesday, November 23, 2021, at Grace First Parish in Russell, Minnesota. A reception will follow at the Russell Community Center. Interment will be in the Russell Cemetery at a later date. Visitation will be held from 4:00 – 7:00 p.m. on Monday, November 22, 2021, at the Hamilton Funeral Home in Marshall. The evening will conclude with a prayer service at 6:30 p.m. Visitation will continue one hour prior to the service on Tuesday, from 10:00 a.m. until the time of services at 11:00 a.m., at Grace First Parish in Russell. Carol Jean Neels was born on January 14, 1934, the only child of Edgar “Ted” and Minnie (Oldenburg) Dahlquist. She was born and grew up in Island Lake Township, Minnesota, and attended grade school in District 61. She went on to Russell High School and graduated with the class of 1951. On October 16, 1953, Carol was united in marriage to Raymond “Ray” Neels. The couple made their home on the family farm outside of Russell for many years and raised their six children there. Carol had many enjoyments including baking, canning, sewing, reading, writing, flowers, gardening, tending to her lawn, and the occasional trip out of town. She also found time to take rides on the four-wheeler and Ranger. Carol was always quick to jump up and greet guests with coffee, a baked good, or sandwich – usually enough that they took some home. Carol was a devoted farm wife, mother, and grandmother. The couple lived on the farm until they moved to Marshall in 2019. Carol entered her heavenly home on Thursday, November 18, 2021, at the Avera Heart Hospital in Sioux Falls, South Dakota. She reached the age of 87 years, 10 months, and 4 days. Blessed be her memory. Carol is survived by her 6 children, Bernard Neels of Palm Beach, FL, Daryl (Kathy) Neels of Lynd, Richard Neels (Kathy Beaird) of Houston, TX, Mary (Dennis) Petersen of Russell, Jan (Joe) Krogman of Marshall, Karen (Joel) Kor of Lynd; 15 grandchildren, Amanda (Jeremy) Lehman, Jennifer Neels (Mark Blanton), Kimberly Neels, Matt Cone (Kim Olsen), Amy Mayer, Leslie (Wayne) Ford, Hayley Neels, Kayla (Dalton) Werkman, Kristine (Andy) Van Damme, Jon Krogman, Jordan (Jaci) Krogman, Jesten (Theresa) Kor, Tom (Stephanie) Kor, Brent (Danielle) Traen, Melissa (Granger) Maranell; 35 great-grandchildren; brother-in-law, Duane Goodmund of Marshall; niece, nephews, other relatives, and many friends. Carol is preceded in death by her husband, Raymond “Ray” Neels; parents, Ted and Minnie Dahlquist; and sister-in-law, Rosella Goodmund. In lieu of flowers, memorials are preferred to the Russell Cemetery Association or [email protected] and Hospice in Marshall.

The family of Carol Jean Neels created this Life Tributes page to make it easy to share your memories.

Send flowers to the Neels family.