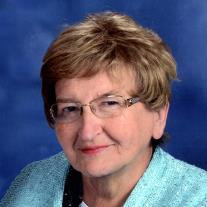 Catharine Theuninck, age 75, Las Vegas, Nevada – formerly of Marshall, Minnesota, passed away on Wednesday, October 5, 2016, at Mountains Edge Hospital in Las Vegas. Mass of Christian Burial is 11:00 AM Wednesday, October 12, 2016, at Holy Redeemer Catholic Church in Marshall. Interment will follow in the Calvary Catholic Cemetery in Marshall. Visitation will be held from 4:00 – 8:00 PM Tuesday, October 11, 2016, at the Hamilton Funeral Home in Marshall. A Rosary will be held at 4:00 PM and a prayer service is scheduled for 7:00 PM. Visitation will continue one hour prior to the service, from 10:00 – 11:00 AM, on Wednesday at the church. Clergy Officiating: Rev. Father Paul Wolf Organist: Dana Funk Special Music: Resurrection Choir ~ Avon Hess, Director Dana Webskowski ~ Amazing Grace, My Chains Are Gone / When All Is Said And Done Congregational Hymns: On Eagle’s Wings / I Am The Bread Of Life / How Great Thou Art / Psalm 23 / Be Not Afraid / O Loving God Active Casket Bearers: Bob Polejewski, Jim Polejewski, Tom Burch, Todd Miller, Keith Miller, Parker Theuninck Catharine Joan Walsh was born November 26, 1940, to Agnes (Vogl) and Thomas Walsh in Rochester, Minnesota. The family resided in Lucan and she attended grade school in Milroy. After moving to Marshall, Catharine graduated from Central High Catholic High School in Marshall, with the class of 1958. Catharine was united in marriage to Joseph Theuninck on September 26, 1959, at Holy Redeemer Catholic Church in Marshall. The couple farmed outside Minneota then moved to a family farm outside of Marshall in 1976, where they farmed for 16 years. After selling the farm, they moved into Marshall and owned Attitudes jewelry store in the mall for 6 years. In addition, their knowledge of home loans brought many local residents the dream of owning a home as they were mortgage originators for over 20 years. Most recently, she has worked alongside her daughter Jenna as a billing Coordinator for Complete Health Center for 16 years. Cathy retired in August of 2011 when she moved to Nevada. Being a 4-H member herself, she was delighted to give back to the area as she and Joseph spent 20+ year as a volunteer leader for the Westerheim Flashing Stars and the Lake Marshall Eagles 4-H club, a place where her family could spend countless hours working on projects, training animals and enjoying learning new skills. Family was the center of everything to Cathy. Joe and Cathy were blessed with 4 children: Jay (deceased), Julie (Errol) Appel of Las Vegas, Jon (deceased) and Jenna (Paul) Puetz of Marshall. Her love for children grew as she was again blessed with 2 grandchildren, Noah and Bella Puetz. Watching her children and grandchildren participate in activities and traveling were her favorite memories. Since retiring 5 years ago, Joe and Cathy have enjoyed being in Las Vegas with their daughter, Julie. Catharine died October 5, 2016 at the Mountain Edge Hospital in Las Vegas, Nevada, at the age of 75 years, 10 months, and 9 days. Blessed be her memory. Cathy is survived by her husband of 57 years, Joe; daughters Julie and Jenna; and grandchildren, Noah and Bella. She is preceded in death by her two sons, Jay and Jon; Mother and Father, Agnes and Thomas Walsh; and two sisters, Margaret Walsh and Rosemary VanMoer.

The family of Catharine Joan Theuninck created this Life Tributes page to make it easy to share your memories.

Send flowers to the Theuninck family.