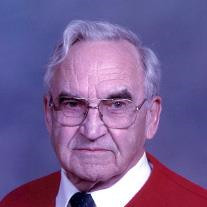 Cecil Harry Knieff, age 91, of Marshall, Minnesota died as a result of a motor vehicle accident in Marshall on Saturday, June 6, 2015. Funeral Services are 11:00 AM Thursday, June 11, 2015 at Wesley United Methodist Church in Marshall. Private family interment will be in the Marshall Cemetery. Visitation will be from 4:00 – 8:00 PM Wednesday, June 10, 2015 at the Hamilton Funeral Home in Marshall with a prayer service at 7:00 PM. Visitation will continue one hour prior to the service, from 10:00 – 11:00 AM, Thursday at the church. Clergy Officiating: Rev. Wes Johnson Organist: Sandy Buesing Special Music: Brad & Nancy Louwagie ~ “Amazing Grace,” “One Day At A Time” Congregational Hymns: “Precious Lord, Take My Hand,” “In The Garden,” “Joyful, Joyful We Adore Thee” Active Casket Bearers: Danielle Waller, Angie Andrews, Dawn Knieff, Richard Serreyn, Michael Serreyn, Jennifer Serreyn Cecil Harry Knieff was born at the family farm on January 6, 1924 in Clifton Township, Marshall, Minnesota. He was the son of Harry and Vera (Schultz) Knieff. Cecil was baptized as an infant and confirmed in his youth at Wesley United Methodist Church in Marshall. He attended country school in Clifton Township and graduated from the Marshall High School. Cecil would then go on to dedicate his life and work to farming. On February 3, 1946, Cecil was united in marriage to Marjean Corrow at her parent’s home in Marshall. The couple raised three children: Bruce, Carol, and Janice. They farmed in Clifton Township and spent over 48 years of marriage together before Marjean passed away on August 24, 1994. In 1986, Cecil moved into Marshall where he has lived since. Cecil was a kind and gentle person who was known for his patience and generosity and truly valued his relationships with family and neighbors. He was a life-time member of Wesley United Methodist Church, a member of Kiwanis Club, and was a one-time active Mason. He was an active board member for the Marshall Cemetery and the Adult Community Center in Marshall and also served on the Clifton and Lake Marshall Township boards. Cecil was an avid bowler and accumulated many trophies and stories. His other enjoyments included watching the Vikings and Twins, roller-skating, playing cards, time spent at the cabin on East Battle Lake, and his grandchildren. Cecil died on Saturday, June 6, 2015, in Marshall, Minnesota at the age of 91 years and 5 months. Blessed be his memory. Cecil is survived by his children, Bruce A. (and Kathy) of Marshall, MN, Carol Serreyn of Marshall, MN, Janice (and Cathy) of Marshall, MN; 6 grandchildren, Danielle Waller, Angie (and James) Andrews, Dawn Knieff, Richard (and Kristen) Serreyn, Michael (and Sabara) Serreyn, Jennifer Serreyn; 6 great-grandchildren; brother-in-law, Rolland Robinson of Osceola, WI; many nephews, nieces, other relatives and friends. Cecil was preceded in death by his parents, Harry and Vera Knieff; wife, Marjean Knieff; grandson, Lance Knieff; son-in-law, Bob Serreyn; and sisters, Lucille (and Robert) Peters, and Shirley Robinson. The family invites everyone to the church basement for a luncheon following the funeral service. In Lieu of flowers, memorials are preferred to the Adult Community Center, Cornerstone United Methodist Church Youth, or donor’s choice.

The family of Cecil Harry Knieff created this Life Tributes page to make it easy to share your memories.

Cecil Harry Knieff, age 91, of Marshall, Minnesota died as a...

Send flowers to the Knieff family.