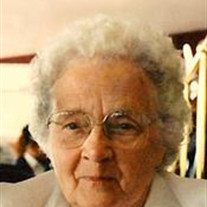 Marshall: Celda E. Mercie, age 97, of Marshall, passed away at the Minneota Manor on Wednesday, July 20, 2011. Funeral services will be 11:00 A.M. Tuesday, July 26th at First Lutheran Church. Burial will be in the St. Lucas Lutheran Church near Clarkfield. Visitation will be one hour prior to the service on Tuesday. Celda Emeline was born on October 25, 1913 in Normania Township, Yellow Medicine County, MN to Edward and Clara (Kise) Lovsness. She was baptized and confirmed in the Lutheran faith. She grew up in Cottonwood with her older brothers Ordell and Jerry, and graduated from Cottonwood High School in 1930. She attended Beauty School in Denver, CO, and worked briefly as a beautician. Celda and Jerome Mercie met in 1941 and were united in marriage on September 14, 1942 in San Luis Obispo, CA. They lived in Tracy and Marshall. The love of her life was her family and doing things with them and for them. She was an accomplished gardener, and she liked to sew and do handwork. She also enjoyed traveling and visited many places in the world, including California, Hawaii, Denmark, Norway, France and Germany. Jerome passed away in 1976 and Celda joined him in death on Wednesday, July 20, 2011 at the Minneota Manor. She had reached the age of 97 years, 8 months and 26 days. She is survived and loved and will be missed by her children, Dana Hill of Oakland, CA and Jim (and Marlys) Mercie of Watertown, SD; grandchildren, Arthur (and Allie) Mount, Amber (and Jason) Swenson, and Kristin (and Brandon) Tilus; great grandson, Jack Mount; also many nieces, nephews, cousins and in-laws. She was preceded in death by her parents; husband, Jerome; and her two brothers, Ordell Lovsness and Jerold Lovsness. Celda will be remembered as a spirited lady with a great sense of humor. Blessed Be The Memory Of Celda E. Mercie

Marshall: Celda E. Mercie, age 97, of Marshall, passed away at the Minneota Manor on Wednesday, July 20, 2011. Funeral services will be 11:00 A.M. Tuesday, July 26th at First Lutheran Church. Burial will be in the St. Lucas Lutheran Church near... View Obituary & Service Information

The family of Celda E. Mercie created this Life Tributes page to make it easy to share your memories.

Send flowers to the Mercie family.