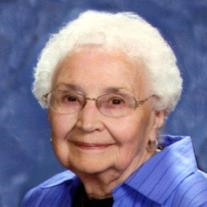 Celesta Hagg, age 96, of Marshall, Minnesota, died on Tuesday, December 3, 2019, at her home in Marshall. Memorial Services will be 11:00 a.m. Saturday, December 28, 2019 at First Lutheran Church in Marshall, Minnesota. Interment will be in the Marshall Cemetery. Visitation will be held one hour prior to the service, from 10:00 – 11:00 a.m. on Saturday at the church. Celesta Elva Hagg was born at the farm home of Daney Edward and Eva (Thornton) Stark on December 16, 1922 in Darfur, Minnesota. She was baptized, confirmed, and married at the Bethlehem Lutheran Church in Darfur. Celesta attended school in Comfrey, Minnesota. After graduating from high school, she then attended French’s Business College in Minot, North Dakota. She was employed in the office of International Harvester Co. in Minot. She was also employed by the Marshall School District in Marshall, Minnesota. It was here that she worked for 23 years in the office at East Side Elementary school. After retirement, she volunteered at her church Thrift Shop and the Senior Center. She was an active and faithful member of First Lutheran Church for over 60 years. On November 24, 1946, Celesta was united in marriage to Albert Francis Hagg. To this union, Margaret Ann Jones and Steven Albert Hagg were born. The couple made their home in Marshall. Her enjoyments in life included gardening, tending to flowers, quilt making, and creating and sending greeting cards. She was a loving and thoughtful wife, mother, sister, aunt, grandmother and friend to many, but God was her closest companion through life. Celesta Hagg died on December 3, 2019, in Marshall, Minnesota, at the age of 96 years, 11 months, and 18 days. Blessed be her memory. Celesta is survived by her grandchildren, Ab (Cleo) Hagg, Cody Hagg, Tess Hagg (Mike Gones); great-grandson, Henrik Steven Gones; sisters, Donna Belle Seavert, Elaine Jorgenson, Anita Carlson, Caroline (Ronald) Finstad; brother, Harlie (Carol) Stark; daughter-in-law, Kathy (Steve) Bettenhausen; sister-in-law, Donna Stark; many nieces and nephews that were very dear to her; many other relatives and friends. Celesta is preceded in death by her husband, Albert Francis Hagg (in 1976); her son, Steven (in 2001); her daughter, Margaret Ann (Marlyn) Jones (in 2016); her parents, Daney and Eva Stark; sisters, Velda Englin, Betty Jane Rathman; brother, Wendell Stark; niece, Emily Englin; nephew, Roger Englin; and brothers-in-law, Harry Englin, John Norell, Harold Carlson, James Seavert, Calvin Jorgenson, and Eugene Rathman.

The family of Celesta Elva Hagg created this Life Tributes page to make it easy to share your memories.

Send flowers to the Hagg family.