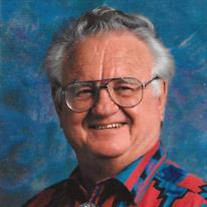 Charles “Chuck” Ausen, age 93, of Marshall, Minnesota died on Wednesday, September 4, 2019, at the Minneota Manor Care Center in Minneota, Minnesota. Memorial Gathering of Family and Friends will be held from 1:00 – 3:00 p.m. Saturday, September 7, 2019, at the Hamilton Funeral Home in Marshall. Interment with full Military Honors will follow in the Marshall Cemetery where he will be buried with his beloved wife Margaret Ann, who passed in 1992. Charles Warren Ausen was born April 13, 1926, to Nels and Irene (Dellar) Ausen in Minneapolis, Minnesota. He was baptized as an infant and was confirmed in his youth in the Lutheran faith. His family moved to Marshall when Chuck was a small child. It is there that Chuck received his school education and graduated with the class of 1944. He was active in multiple sports including Basketball, Football and Track. In 1944, as a senior, he was awarded the prestigious “Bud Rose” Trophy. That award is presented to the athlete who in the estimation of the students in high school ranks first in athletic performance, loyalty, sportsmanship, leadership and cooperation. After graduation Chuck enlisted in the United States Navy, achieving Pharmacist Mate - 3rd Class, and served his country during World War II. After his honorable discharge in 1946, Chuck returned home where he began working as the first ice cream maker for Neisen & Schwan’s Dairy. He then worked for Perfection Ice Cream as a home to home delivery man throughout Southwest Minnesota. On January 18, 1947, Chuck was married to Margaret Ann McMillian in Canby, Minnesota. The couple made their home in Marshall and were married for 45 years. Margaret Ann passed away in 1992. They raised their three daughters in Marshall. He worked for the Marshall Police Reserve in the 1960s and enjoyed teaching youth gun safety courses among other jobs. Chuck was a City Letter Carrier for the United States Post Office for over 28 years, retiring in April of 1986. He was a Lifetime Member of the Marshall American Legion, Post 113. Chuck’s enjoyments in life included socializing with friends and family, particularly when traveling the country adding to his large beer can collection. He loved going fishing with his youngest brother Roger in the old DeSoto. He was an avid coin collector and passed that enjoyment on to some of his grand- and great-grand-children. Chuck made all of his family, and many others he knew, a special framed piece including their baby picture and coin from their year of birth. He cherished time spent with his family and served as assistant to his loving wife, Muggs, as she worked on her various art projects. Chuck would assist her as needed and supported many projects as a handyman. They enjoyed many years at “Sandy Point Park” on Lake Koronis in Paynesville, Minnesota. Chuck died September 4, 2019, at the age of 93 years, 4 months, and 22 days. Blessed be his memory. He is survived by his children, JoAnne (Marvin) Hansen of Breezy Point, Linda Brady of Sioux Falls, SD, Karen (Steve) Rasmussen of Marshall, Ann Priest of Keizer, OR; many grandchildren, great-grandchildren and great-great grandchildren; brother, Roger (Joyce) Ausen of Rockport, TX; brothers-in-law, Leroy Lanoue of Alexandria, Arthur “Bud” (Vivian) McMillian of Paynesville; sisters-in-law, Audrey Ausen of Prior Lake, Alice McMillan of New Market; many nieces, nephews, other relatives, and friends. Chuck was preceded in death by his wife, Margaret Ann Ausen; parents, Nels and Irene Ausen; infant daughter, Jean Marie Ausen; son, Terry Hanson; son-in-law, Dennis Brady; siblings, Layton Ausen, Ray (Leila) Ausen, Robert (Anita) Ausen, Donna Lanoue; sister-in-law, Dorothy Mae (Chet) Wiener; and brother-in-law, Robert McMillan.

The family of Charles "Chuck" Warren Ausen created this Life Tributes page to make it easy to share your memories.

Send flowers to the Ausen family.