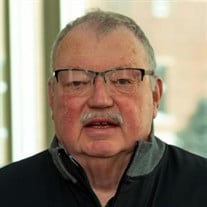 Charles M. Myrbach, known to most as “Chuck or Charlie”, died at age 79 as the result of a tractor accident at his farm home on Friday, November 6, 2020. A Memorial Gathering of Family and Friends will be held from 5:00 - 7:00 p.m. Wednesday, October 6, 2021, at the Hamilton Funeral Home in Marshall, Minnesota. The evening will conclude with a memory share, beginning at 6:30 p.m. Memorials may be sent to the Charles M. Myrbach Endowed Scholarship, in care of the SMSU Foundation in Marshall, Minnesota. Charles Martin Myrbach was born on May 1, 1941, in Omaha, Nebraska. He was the son of Charles “Charlie” and Dorothy (Adams) Myrbach. Chuck grew up in Omaha and graduated from Omaha North High School with the Class of 1959. He then went on to further his education at the University of Nebraska-Omaha with Bachelors & Masters degrees in Psychology. Charles served as a school psychologist in Iowa before holding positions at the University of Nebraska-Omaha and Northern Michigan University. Chuck then served at Southwest Minnesota State University in Marshall, Minnesota, for 36 years in various roles such as Director of Research and Institutional Grants, Interim Vice President of Public Services and Development, Interim Vice President of Enrollment Management, as well as an Assistant Psychology Professor. Chuck was passionately involved in many aspects of the university and campus life. SMSU, along with some special neighbors, became his Marshall family. Chuck enjoyed socializing and attending most college sporting events, especially football and basketball. Often, he helped announce & broadcast SMSU Football games. After retirement, he was very active on the SMSU Foundation Board as well as volunteering to help out wherever he could. He was an outdoor enthusiast that loved photography, hunting, fishing and bird watching. For years he raised fallow deer and exotic pheasants, among others, on his farm near Marshall. He often wrote monographs on the seasons, his shovels, and other aspects of the outdoors. But probably dearest to his heart were his Irish Setters he rescued over the years. He was truly a “dog whisperer”. Many years before retirement, he purchased a cabin on Leek Lake near Vergas, MN, where he would spend Minnesota’s warmer months. He cherished time spent with his friends and family at cabins on Leek Lake and Lake Melissa, near Detroit Lakes. He enjoyed exploring the forests on his ATV searching for the elusive trillium, fishing, reading and getting to know his Leek Lake neighbors. He considered them all to be part of his Lake family. Chuck now soars with the loons and eagles he so regularly admired. Charles Myrbach died on Friday, November 6, 2020, at the age of 79 years, 6 months, and 5 days. Chuck was a gentle giant who loved life….rich in relationships and experiences. Blessed be his memory. Chuck is survived by a sister, Sonja Martin of Salina, KS; nephews, Rick (and Julie) Martin of Lindsborg, KS, and John Martin of Salina, KS; cousins, Hans (and Gail) Tronnes of the Twin Cities, Susie (and Jim) Ross of Duluth, MN; as well as other special relatives and friends. Charles is preceded in death by his parents; brother-in-law, Richard “Dick” Martin; and cousin, Gretchen Johnson.

The family of Charles Martin Myrbach created this Life Tributes page to make it easy to share your memories.

Charles M. Myrbach, known to most as “Chuck or Charlie”, died...

Send flowers to the Myrbach family.