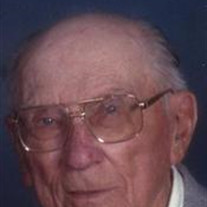 Milroy: Charles James “Charlie” Tomasek, age 90, of Milroy, passed away at the Avera Morningside Heights Care Center on Friday, March 4, 2011. Funeral services will be 10:30 A.M. Friday, March 11, at Our Saviors Lutheran Church in Milroy. Military honors will be furnished by the Milroy American Legion Post. Burial will be in the Milroy Public Cemetery. Visitation will be 5:00 P.M. to 7:00 P.M. with a 6:30 P.M. prayer service Thursday at the Hamilton Funeral Home, Marshall. Visitation will continue one hour prior to the service Friday at the church. Condolences may be sent to www.hamiltonfh.com. Charles was born November 5, 1920 in Milroy, Minnesota to James and Bessie (Rychecky) Tomasek. He was baptized and confirmed in the Christian faith, and graduated from the Milroy Public School in 1938. He entered the U.S. Army in October 1942 and served his country at Hickam Field, Honolulu, HI until he was honorably discharged on February 6, 1946. He returned to Milroy and became the Postmaster in 1949 where he served for over 30 years. On June 7, 1951, he was united in marriage to Yvonne J. Raveling at St. Matthew’s Church in Waterbury Township. After retiring, he worked for Sears in the small engine repair department and drove school bus for over 15 years. He also mowed the Milroy Public Cemetery for many years. Yvonne passed away on July 6, 2009 and Charlie joined her in death on March 4, 2011. He had reached the age of 90 years, 3 months and 27 days. He is survived by his two daughters, Sherri (and Tom) Patzer of Mitchell, SD and Michelle (and Gary) Stassen of Marshall; five grandchildren, Ryan (Amanda Jo) Patzer of Mitchell, Amanda (and Greg) Neppl of Mitchell, Christopher Stassen of Marshall, Nicholas Stassen of Marshall and Melissa Stassen of Marshall; and one great grandson, Charles Patzer of Mitchell. He was preceded in death by his parents The love of his life was his family. His enjoyments and hobbies included stamp, gun and coin collecting, going to auctions, fishing, hunting, bowling and playing horseshoes. Charlie was a faithful member of Our Saviors Lutheran Church where he was the treasurer for over 30 years. He also was a member of the Milroy American Legion, charter member and treasurer for the Milroy Lions Club for over 20 years and served as the Grand Marshal for the Milroy Centennial. Blessed Be His Memory Memorials are to be directed to Our Saviors Lutheran Church and Milroy Lions Club

The family of Charles James Tomasek created this Life Tributes page to make it easy to share your memories.

Send flowers to the Tomasek family.