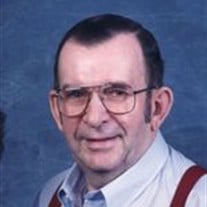 Services for Charlie, 72 of Marshall will be at 10:30 a.m. Wednesday, Sept. 9 at Christ Evangelical Lutheran Church in Marshall. Visitation will be from 4:00-8:00 Tuesday, Sept. 8 at Hamilton Funeral Home in Marshall with a prayer service at 7:00 p.m. Visitation will continue one hour prior to the Wednesday service. Burial will at the Marshall Cemetery following the service. Lunch will follow at the church. Charlie passed away peacefully on Saturday, Sept. 5 at the Avera-McKennan Hospital in Sioux Falls, SD surrounded by his family. He is now free of his pain and suffering. Charles Glenn Ziegenhagen was born Jan. 2, 1937 to Francis and Leona (Hammermeister) Ziegenhagen in Rowena, MN. Charlie was baptized and confirmed in the Lutheran faith. Charlie was united in marriage to Judy Campbell on Nov. 7, 1955 in Redwood Falls, MN. He farmed near Echo, MN in his early years. He went on to drive semi-truck for Asphalt Supply Co. in Marshall, before becoming an independent owner-operator. He retired in 1991, with over 2,000,000 miles logged, covering 49 states. Charlie was a devoted husband and loving father and grandfather. He loved spending time with his family. He also enjoyed fishing, hunting, playing cards, snowmobiling, watching and driving race cars, watching old Westerns, and having coffee at Mike’s Cafe with his buddies. Survivors include his beloved Judy of Marshall, his children Cindy (and Brian) Harper of Columbia Heights, MN; Bill (and Tammy) Ziegenhagen of Marshall; 4 grandchildren, Jay and Katrina Harper, Kristi and Kara Ziegenhagen; his long time friend, Cecil Doyle of Marshall; many other relatives and friends. Charlie was proceeded in death by his parents, Francis and Leona Ziegenhagen and sister, Lois Hoffbeck. Charlie had a wit and wonderful sense of humor that will be deeply missed.

Services for Charlie, 72 of Marshall will be at 10:30 a.m. Wednesday, Sept. 9 at Christ Evangelical Lutheran Church in Marshall. Visitation will be from 4:00-8:00 Tuesday, Sept. 8 at Hamilton Funeral Home in Marshall with a prayer service at... View Obituary & Service Information

The family of Charles Glenn Ziegenhagen created this Life Tributes page to make it easy to share your memories.

Send flowers to the Ziegenhagen family.