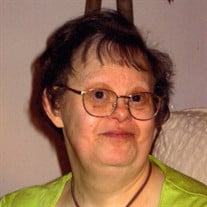 Charliene Belsheim, age 72, of Marshall, Minnesota, passed away on Saturday, February 15, 2020, at the Avera Regional Medical Center in Marshall. Public Visitation will be held for one hour leading up to the private service, from 1:00 - 2:00 p.m. on Saturday, February 29, at the Hamilton Funeral Home in Marshall. Private celebration of her life will be held at 2:00 p.m. Saturday, February 29, 2020, also at the Hamilton Funeral Home in Marshall. Family will then attend interment in the Marshall Cemetery. A second Memorial Gathering of Family and Friends will be held later, likely in early May. Please watch for future date and times, as they will be announced once known. Charliene Reneau Belsheim was born on March 3, 1947, in Marshall, Minnesota, to John and Lucille (Johnson) Belsheim. She was baptized as an infant at Wesley United Methodist Church and grew up in Marshall. Through the tireless efforts of her Mother, "Charlie" learned to read and write, which opened her world to reading books and the enjoyment of reading stories as well as greeting cards sent to her. She enjoyed helping out with housework, quite meticulously, and spending time with her family. For decades "Charlie", as she was known by many, attended the Lyon County DAC, and took part in contracting work doing several jobs from cleaning to stuffing envelopes. She was a strong-willed woman with a large personality. She was creative, staying incredibly meticulous in her coloring, and expressed herself in her personal fashion, shoe collection, and dancing style. She loved music, food, going to parades, playing cards, traveling every summer with family and staying caught up on some of her favorite shows to include I Love Lucy, The Golden Girls, Wheel of Fortune, Johnny Carson, and many western shows. After her mother's passing in 2006, "Charlie" was cared for by countless people over the years, from HSI to the Nursing Home Staff, hospital nurses to her caretakers while on Hospice. Her family is so grateful for the love and care Charlie was shown during her time in Marshall. Charliene Belsheim died on February 15, 2020, in Marshall, Minnesota, at the age of 72 years, 11 months, and 12 days. Blessed be her memory. She is survived by her siblings, Rodney Belsheim, Janice Belsheim, Selma Spielmann, Merekay Hokenstrom; aunts, nieces and nephews, other relatives, and friends. Charlie is preceded in death by her parents and grandparents. In lieu of flowers, memorials are preferred to Prairie Home Hospice in Marshall (https://prairiehomehospice.org/donate) or The ARC (for individuals with intellectual and developmental disabilities – see thearc.org).

Charliene Belsheim, age 72, of Marshall, Minnesota, passed away on Saturday, February 15, 2020, at the Avera Regional Medical Center in Marshall. Public Visitation will be held for one hour leading up to the private service, from 1:00 - 2:00... View Obituary & Service Information

The family of Charliene “Charlie” Belsheim created this Life Tributes page to make it easy to share your memories.

Send flowers to the Belsheim family.