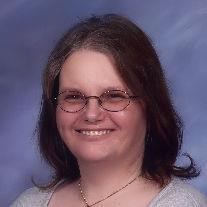 Cindy Jeanne Roberts, age 56, of Marshall, Minnesota, passed away peacefully on Sunday, January 24, 2016 at her home in Marshall. Memorial Services are 11:00 AM Saturday, April 9, 2016 at the Hamilton Funeral Home in Marshall. (This is an updated time). Private family interment will be at a later date in the St. John Lutheran Church Cemetery, Atwater, Minnesota. Visitation will be held one hour prior to the service, from 10:00 – 11:00 AM Saturday, April 9, 2016, also at Hamilton Funeral Home in Marshall. Cindy Jeanne Forsberg was born April 10, 1959, in Newport, Rhode Island. She was the daughter of Neil and Patsy (Wright) Forsberg. Cindy moved around growing up in a Navy family. She attended High School in Atwater, Minnesota and then enrolled in a LPN program through the United States Army. She then served honorably in the U.S. Army during Desert Storm. Cindy made her home in the Atwater and Willmar areas before moving to Marshall about 10 years ago. She worked several places but most recently was employed at Wal-Mart and the AmericInn Hotel in Marshall. Cindy was a member of Radiant Life Baptist church in Marshall, using her musical talents as part of the praise and worship team. She was a creative person who enjoyed playing guitar, coloring, drawing, and her many pet dogs. Her current dog, Shelly, brought joy to Cindy. Cindy Roberts died on Sunday, January 24, 2016, in Marshall, Minnesota at the age of 56 years, 9 months and 14 days. Blessed be her memory. Cindy is survived by her children, Adam (and Tonya) Roberts of Marshall, Adrian Roberts (and Darren Reigstad) of St. Cloud, Allyson (and Elvin “Geovany”) Suazo of Fridley; 9 grandchildren, Gwen Roberts, Lexie Roberts, Kailyn Roberts, Lawrence Terzich, Lucas Terzich, Liam Roberts, Landon Reigstad (due in May), Emily Suazo, Chloe Suazo; siblings, Linda Ketteler of Hot Springs Village, AR, David Roberts of St. James; nieces, nephews, other relatives and many friends. Cindy was preceded in death by her parents, Neil and Patsy Forsberg.

Cindy Jeanne Roberts, age 56, of Marshall, Minnesota, passed away peacefully on Sunday, January 24, 2016 at her home in Marshall. Memorial Services are 11:00 AM Saturday, April 9, 2016 at the Hamilton Funeral Home in Marshall. (This is an... View Obituary & Service Information

The family of Cindy Jeanne Roberts created this Life Tributes page to make it easy to share your memories.

Send flowers to the Roberts family.