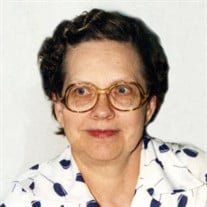 Clara DeWispelaere, age 94, of Marshall, Minnesota, died on Sunday, February 23, 2020, at Heritage Pointe Senior Living in Marshall, Minnesota. Mass of Christian Burial is 1:30 p.m. Thursday, February 27, 2020, at Saints Peter and Paul Catholic Church in Ivanhoe, Minnesota. Interment will follow in the church cemetery. Visitation will be held one hour prior to the service on Thursday, from 12:30 – 1:30 p.m., at the church in Ivanhoe. Clara Agnes Lukaszeski was born on December 27, 1925, on the family farm in Lincoln County, Minnesota, to parents Joseph and Margaret (Lutzwick) Lukaszeski. She was baptized, received first communion, and was confirmed at St. John Cantuis Catholic Church in Wilno, Minnesota. She attended country school before helping her folks on the family farm. On February 22, 1943, Clara was united in marriage to Alphonse DeWispelaere at her church in Wilno. The couple made their home and farmed between Ivanhoe and Arco. The couple had 5 children and spent over 27 years of marriage together. After her husband’s death in 1971, Clara spent a few more years on the farm before moving to Ivanhoe. There Clara worked at the nursing home doing laundry care. After her children were through school, Clara moved to Marshall in the early 1980s and worked as a Dietary Aide at Weiner Memorial Hospital. When she needed more assistance with her daily care, Clara moved to Heritage Pointe in Marshall about one year ago. Clara was a very hard-working woman who never took a vacation. Her time off was spent going to dances with Alphonse, tending to her flowers, or the annual trip to the Minnesota State Fair. Clara’s enjoyments in life included her chickens, going for a nice drive when the weather permitted, and playing cards with the neighborhood card circles. Clara DeWispelaere died peacefully on February 23, 2020, in Marshall, Minnesota. She had reached the age of 94 years, 1 month, and 27 days. Blessed and eternal be her memory. Clara is survived by her 5 children, Diane Scott of Marshall, Darlene Anderson of the Twin Cities, Carolyn Bartlow of Elk River, Jean (and Art) Thooft of Audubon, IA, Jeff DeWispelaere of Elk River; 7 grandchildren; 6 great-grandchildren; 3 great-great-grandchildren; sister, Laura Walker of Kenosha, Wi; sister-in-law, Alice Murphy of Kansas City, KS; nieces and nephews, other relatives, and many friends. She is preceded in death by her parents, Joseph and Margaret Lukaszeski; husband, Alphonse DeWispelaere; great-grandson, Dillon Thooft; and brothers, Billy and Bud Lukaszeski.

The family of Clara Agnes DeWispelaere created this Life Tributes page to make it easy to share your memories.

Send flowers to the DeWispelaere family.