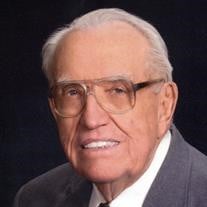 Clarence Elmer Engler, age 97, of Marshall, Minnesota, passed away on Wednesday, March 9, 2016, at the Prairie Home Hospice House in Marshall. Funeral Services are 11:00 AM Wednesday, March 16, 2016 at St. Stephen Lutheran Church in Marshall. Following a reception, interment will be in the Tracy City Cemetery. Visitation will be held from 5:30 – 7:00 PM Tuesday, March 15, 2016, at the Hamilton Funeral Home in Marshall. A prayer service is scheduled for 6:30 PM. Visitation will continue one hour prior to the service, from 10:00 - 11:00 AM, on Wednesday at the church. Clergy Officiating: Rev. Lyle Snyder Casket Bearers: Fellow Members of Westbrook VFW, Post 5098 Clarence Elmer Engler was born on May 16, 1918 in Westbrook, Minnesota. He was the son of John and Mathilda (Grams) Engler. Clarence was baptized as an infant and confirmed in his youth in the Lutheran faith. Clarence grew up near Westbrook and attended District #56 country schools through the 8th grade. Clarence then went to help his parents on the farm. In 1942, Clarence entered the Army Air Force and was stationed out of Sioux Falls, South Dakota serving overseas and then the 47th Medical Supply Platoon after the VE day. As a young soldier, Clarence, while on leave from active duty, met Verna Graham. Clarence earned his honorable discharge in 1946 and returned to the home farm. On February 5, 1947, they were united in marriage at the Church of Christ in Tracy. The couple lived and farmed near Westbrook until, in 1961, they moved to Edgerton to farm for 5 more years. They resided in Marshall since 1966. Clarence and Verna were blessed with two children: Linda and Michael. They shared an amazing 68 years of marriage together before Verna dies last year. In addition to farming, Clarence also worked at the Lyon County Farm Center. After retiring in 1985, he did maintenance for J & J Apartments and served as janitor for Wesley United Methodist Church in Marshall. He was a proud member of the Westbrook VFW and Marshall American Legion. Clarence was also a member of the St. Stephen Lutheran Church in Marshall. Clarence’s other enjoyments in life included fishing, birdwatching, and spending time with the family he loved so much. Clarence joined his wife in Heaven on Wednesday, March 9, 2016, in Marshall, Minnesota at the age of 97 years, 9 months and 22 days. Blessed be his memory. Clarence is survived by his children, Linda Heinrich of Dawson, Michael (and Deborah) Engler of Marshall; grandson, Aaron Lange of Dawson; sister-in-law, Dorothy Willems of Jordan; nephews, nieces, other relatives and many friends. He was preceded in death by his parents, John and Mathilda Engler; wife, Verna Engler; son-in-law, Ken Heinrich; sister, Isabel (and Hulrich) Nibbe; brother, Elder (and Mildred) Engler, and several nieces and nephews. The family invites everyone to a luncheon immediately following the service.

The family of Clarence Elmer Engler created this Life Tributes page to make it easy to share your memories.

Send flowers to the Engler family.