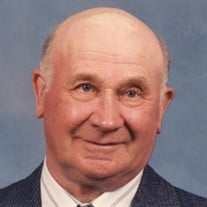 Clarence Huck, age 93, of Marshall and formerly of Russell, Minnesota, died on Wednesday, January 13, 2021, at Minneota Manor. A Private Funeral Service will be Saturday, January 16, 2021, at Grace First Parish in Russell, Minnesota. Interment will follow in the Russell Cemetery. A walk-through visitation, open to the public, will be held from 12:00 noon - 2:00 p.m. Saturday, January 16, 2021, at Grace First Parish in Russell. Occupancy limits and social distancing must be observed throughout all services. Masks are required at all public indoor gatherings. Clarence Henry Huck, Jr., was born on February 27, 1927, in Elma, Iowa, to the late Clarence, Sr., and Irene (Meyer) Huck. He was raised in the Elma area and attended country school. Clarence was baptized in Hanover, Iowa. After the 8th grade, Clarence started working on the family farm. In 1950, Clarence moved to Minnesota and began farming outside of Russell. Clarence met the love of his life, MaryAnn, at a dance in Boyd, Minnesota, and the couple was united in marriage on February 10, 1963, at the Lutheran Church in Canby, Minnesota. They spent 56 years of marriage together and had 2 sons. The couple lived and farmed outside Russell until 2015 when they moved into Marshall. In 2018, due to health concerns, they moved to the Minneota Manor Care Center. MaryAnn preceded Clarence in death in July of 2020. Clarence was a hard-working farmer, he milked cows, raised cattle and worked the land. His farm was known for the big barn and his silos. After “retiring” from farming, Clarence enjoyed tending to his vegetable garden, fishing, and most of all, spending time with friends and family. Clarence was a true people person and he had spectacular communication skills and was always available to listen. He loved visiting with everyone around a cup of coffee and a little lunch. He was a member of the St. Peter’s Church in Balaton, Minnesota, until the late 1970s, when he then joined the First Grace Parish congregation in Russell. Clarence Huck died on January 13, 2021 in Minneota, Minnesota, at the age of 93 years, 10 months, and 17 days. Blessed be his memory. Clarence is survived by his sons, Delmond Huck of Apple Valley, Daryl (Lori) Huck of Waukee, IA; grandson, Matthew Huck of Iowa City, IA; sister, Marjorie Matthews of Canby; nieces, nephews, other relatives, and friends. Clarence is preceded in death by his wife, MaryAnn Huck; parents, Clarence Sr. and Irene Huck; and two sisters, Margaret Anderson, and Merle Yearous.

The family of Clarence Henry Huck Jr. created this Life Tributes page to make it easy to share your memories.

Clarence Huck, age 93, of Marshall and formerly of Russell, Minnesota,...

Send flowers to the Huck family.