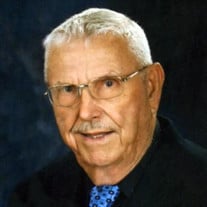 Clarence ‘Mac’ McLaughlin, age 94, passed away on May 10, 2020 in Marshall, Minnesota. Now that many pandemic restrictions have lifted, the family invites you to join them in celebrating Mac. Visitation will be held from 5:00 – 7:00 p.m. Friday, May 7, 2021, at the Hamilton Funeral Home in Marshall. Graveside Service with Military Honors will be Saturday May 8, 2021 at 10:00 a.m. in the St. Clotilde Catholic Cemetery in Green Valley, Minnesota. Occupancy limits and social distancing must be observed throughout all services. Masks are still required at all public indoor gatherings. Clarence Bernard McLaughlin was born on August 11, 1925, in Baker, Montana, to Alfred and Vetleen (Rosera) McLaughlin. He grew up on a wheat and cattle ranch on the edge of the North Dakota Badlands. Clarence was baptized, received first communion, and was confirmed in the Catholic faith. He attended the Mound Country School and then the Boarding School in Marmarth, North Dakota, then returned to help on the home place. When he joined the Civilian Conservation Corps at age 15, he told them he was 16 to meet the required age. He served his time in the CCC in Miles City, Montana. After turning 18 he joined the United States Army serving during the tail end of World War II. He spent a year of his enlistment in occupied Japan and earned an Honorable Discharge. Mac returned home where he met Jean Davis at a dance in Rhame, ND. Clarence and Jean were united in marriage on October 14, 1948, in Baker, Montana. The couple made their home in Green Valley for nearly 66 years while raising their four children. Mac worked for 45 years as an auto mechanic at Longtin’s Service Station in Marshall. Many of Longtin’s customers preferred that only Mac service their cars. After a year of retirement Mac found an opportunity to go back to work. He spent the next 20 years driving for Reinhart Foodservice where he enjoyed delivering and meeting many people in a four-state area. Mac retired from Reinhart in 2012. Clarence was a past commander of the Marshall VFW. Clarence was able to attend an Honor Flight to Washington DC and was a recipient of a Quilt of Valor. He was also active on the Green Valley School Board and was an avid gardener, known all around for his amazing produce and generosity. He was also an early pioneer in the wine making in Green Valley. He specialized in rhubarb, elderberry and wheat wine. Mac’s other enjoyments in life included camping, telling stories about growing up in North Dakota and spending time with his grandchildren and great-grandchildren. Also visiting and playing bingo with his many friends at Hill Street. Clarence McLaughlin died on May 10, 2020 in Marshall, Minnesota at the age of 94 years, 8 months and 29 days. Blessed and eternal be his memory. Mac is survived by his wife of 71 years, Jean McLaughlin of Marshall; 4 children, Linda Jaspersen of Alexandria, MN, Dennis McLaughlin of Stoneham, MA, Gary (and Gloria) McLaughlin of Broomfield, CO, Tim (and Karen) McLaughlin of Willmar, MN. Nine grandchildren, 21 great-grandchildren; sister, Lorena Dieken of Minneota, MN; many nieces and nephews, other relatives and friends. He was is preceded in death by his parents, Alfred and Vetleen McLaughlin; grandson Jason Jaspersen; son-in-law Bruce Jaspersen and 10 siblings.

Clarence &#8216;Mac&#8217; McLaughlin, age 94, passed away on May 10, 2020 in Marshall, Minnesota. Now that many pandemic restrictions have lifted, the family invites you to join them in celebrating Mac. Visitation will be held from 5:00... View Obituary & Service Information

The family of Clarence Bernard McLaughlin created this Life Tributes page to make it easy to share your memories.

Send flowers to the McLaughlin family.