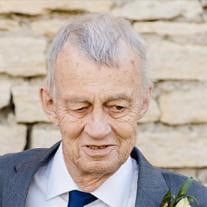 Clarence Zylstra, age 80, of Marshall, Minnesota, passed away on Thursday, February 9, 2017, at Avera Marshall Regional Medical Center in Marshall. Funeral Services are 10:30 a.m., Monday, February 20, 2017, at First Lutheran Church in Marshall. Following a reception, interment will be in the Worthington Memorial Gardens Cemetery. Visitation will be held from 4:00 – 8:00 PM, Sunday, February 19, 2017, at the Hamilton Funeral Home in Marshall. A prayer service is scheduled for 7:00 PM. Visitation will continue one hour prior to the service, from 9:30 – 10:30 AM, on Monday at the church. Clarence Zylstra, lover of people and lover of life left this world a better place on Thursday February 9, 2017, after just turning 80. Clarence has been known by many names in his long life: Clarence, Pete, Dad, and Ba. Clarence was born Clarence Duane Zylstra on January 12, 1937, in Ocheyedan, IA to his parents Joe and Margaret Zylstra. Clarence grew up working on his dad’s farm near Worthington, Minnesota with his four brothers and one sister, going to a one room school house through the eighth grade. Clarence loved life on the farm and especially enjoyed working with cows. Clarence also spent as much time as possible with his brothers, sisters, and a close group of friends in Worthington who enjoyed driving cars, going to dances, and just plain fun. Clarence then left the farm and embarked on numerous jobs, milking cows in California, being a janitor for the University of Minnesota children’s cancer ward, and becoming a tool and die machinist in St. Paul, Minnesota. Sometime along the way, Clarence developed the moniker “Pete.” While the origins of that story are either lost to history or shouldn’t be shared in the paper, Clarence became Pete to many people while living in Minneapolis, Minnesota. It was when he was known by the nickname “Pete” that Clarence met Dianne Stofferahn, going on their first date on New Year’s 1966 and marrying her on December 17, 1966, in Worthington, MN. Clarence and Dianne loved each other through all of life’s ups and downs until Dianne passed on June 13, 2013. These last four years were the hardest for Clarence without Dianne as his partner. With Dianne at his side, Clarence got his G.E.D. and then went to college in his late 30’s. Clarence graduated from Southwest State University and then became Program Coordinator and Supervisor for the Lyon County Developmental Achievement Center working with developmentally challenged adults. Clarence worked at the DAC until his retirement in 1995. In 1976, Clarence became known as “Dad” when his only child Joel was born. Clarence was an amazing dad. He instilled in Joel a deep love of cars, the importance and curiosity and learning, and how to really enjoy life. Clarence loved to regale Joel with stories of his youth with his brothers and sister, and then end those stories by admonishing him not to do anything that he had done back then. Most importantly, Clarence told Joel often that he could do anything in life that he set his mind to and was Joel’s biggest fan, yelling “Atta Boy Joel” loud enough to embarrass Joel when he graduated from law school. In 2006, Clarence became known as “BA” when his only grandson Nicholas was born. Together with Dianne, Clarence wanted to spend as much time with Nick as he could, moving to a one-bedroom apartment in Minneapolis to take care of Nick every day for eighteen months. Clarence loved walking Nick around the block in his coaster wagon so that Nick could look at the nearby light rail trains and would patiently wait on the corner with Nick until one would come down the tracks. Clarence often said that taking care of Nick for that time was one of the best things he ever did. Clarence is survived by his son, Joel (Amy) of Apple Valley; grandson, Nicholas; four siblings, Corliss (Barbara) Zylstra of Arlington, VA; Edward (Shirley) Zylstra of Worthington, MN; Janice (Larry) Vanden Bosch of Bentonville, AR; Marvin Zylstra of Worthington, MN, as well as many other well-loved relatives and friends. Clarence was preceded in death by his beloved Dianne; his parents, Joe and Margaret Zylstra; his brother, Robert; his sister-in-law, Barbara; and two infant siblings. I, Joel, am going to greatly miss my dad – just like many of you are. I don’t know if there are 1961 Ford Convertibles in heaven, but if there are, Clarence is driving a white one around with his wife Dianne and his brother Bob. Blessed be his memory.

The family of Clarence Duane Zylstra created this Life Tributes page to make it easy to share your memories.

Send flowers to the Zylstra family.