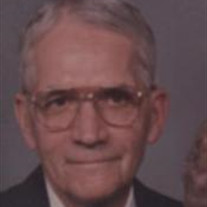 Marshall: Clifford Hively, age 88, of Marshall, formerly of the Balaton and Arco areas, passed away Sunday, July 7, 2013 at the Colonial Manor in Balaton. Funeral service will be 10:00 A.M. Wednesday, July 10th at Hamilton Funeral Home. Visitation will be one hour prior to the service. Burial will be in the Marshall Cemetery. Clifford Earl was born on September 30, 1924 in Russell , MN to Earl and Mae (Spear) Hively. He was baptized and confirmed at Grace Lutheran Church in Russell. He farmed the family homestead and on August 24, 1948, Clifford was united in marriage to Eloise Irene Greenfield at her parents home in Rock Lake Township. They farmed near Balaton and then moved to a farm near Arco. Clifford farmed from 1942 to 1972. He then was a repairman for the Surge Company for 30 years. He also worked part time for Ness Electric in Marshall. Clifford was a hardworking farmer. His enjoyments included visiting with his family, especially his grandchildren and great grandchildren, and friends, helping neighbors, woodworking and carving, traveling, and activities at the Colonial Manor. He is survived by his son, Clarence of Tyler; brother, Ray (and Evelyn) Hively of Marshall; two sisters, Alice Gray of ????, Iowa and Helen (and Arnold) Vanwinkle of Balaton; grandsons, Jay (and Jennifer) Hively of Madison, SD and Jesse Hively of Hurley, SD; three great grandchildren, Wiatt Hively, Connor Hively and Carson Hively; also many other relatives and friends. He was preceded in death by his parents; wife Eloise; son, David; sister, Gladys Olson; and brother, Lester Hively. Clifford was a member of St. Stephen Lutheran Church at the time of his death. Blessed be the memory of Clifford Hively

The family of Cliford Earl Hively created this Life Tributes page to make it easy to share your memories.

Marshall: Clifford Hively, age 88, of Marshall, formerly of the...