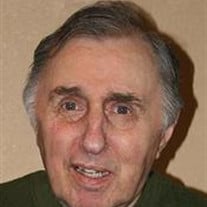 Marshall: Conrad L. Arndt, age 75, of Marshall, passed away at his residence on Monday, September 2, 2013. A memorial service will be 11:00 A.M. Saturday, September 7th at Albright United Methodist Church. Visitation will be 5:00 P.M. to 8:00 P.M. with a 7:00 P.M. prayer service Friday at Hamilton Funeral Home and will continue at the church on Saturday, one hour prior to the service . Burial will be in the Hope Cemetery in Tyler. Conrad Lee was born on September 26, 1937 in Tyler, Minnesota to parents Henry and Josephine Alvena (Schlamann) Arndt. He was baptized and confirmed at the Russell United Presbyterian Church. He graduated from Russell High School in 1955. On April 21, 1959, Conrad was entered into the United States Army. He was honorably discharged on March 22, 1961. On September 23, 1961, Conrad was united in marriage to Iona Stensgaard at the Missionary Alliance Church in Tyler. Conrad worked in building construction in Arizona from 1955 to 1957. He moved back to Marshall and worked for Carr-Chaput and George Vercruysse before starting Conrad Arndt Construction in 1963. He retired in 2002. He was a member of Albright United Methodist Church. The love of his life was his family and his friends. His enjoyments included being at his lake homes, hunting, fishing and woodworking. He is survived by his wife, Iona of Marshall; two daughters, Cindy (Kent) Gruhot of Port Falls, Idaho and Judy (Butch) Kimpe of Marshall; a grandson, Conner Kimpe; three siblings, Janice (Lawrence) Lange of Deerwood, MN, Michael (Jane) Arndt of Watertown, MN and Thomas (Betty) Arndt of Verdale, Mn; also many other relatives and friends. He was preceded in death by his parents; infant daughter, Linda Kay ; infant sister, Mary Louise; sister, Susan (John) Washtock; father and mother-in-law, Stanley and Edna Stensgaard. two brother-in-laws, Gordon and Roger Stensgaard; two sister-in-laws, Ruthann (Douglas) McNeely and Janet (Steven) Stensgaard; a niece. Megan Stensgaard. Bless be the memory of Conrad Lee Arndt

Marshall: Conrad L. Arndt, age 75, of Marshall, passed away at his residence on Monday, September 2, 2013. A memorial service will be 11:00 A.M. Saturday, September 7th at Albright United Methodist Church. Visitation will be 5:00 P.M. to 8:00... View Obituary & Service Information

The family of Conrad Lee Arndt created this Life Tributes page to make it easy to share your memories.