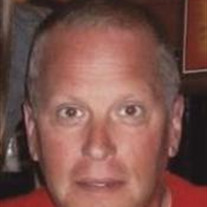 Marshall: Craig A. Hoefs, age 45, of Marshall-Tracy area formerly of Mankato, entered his heavenly home at Prairie Home Hospice House on Friday, December 13, 2013. Celebration of Craig’s life will be 11:00 A.M. Monday, December 16th at Marshall Open Door Assembly Church. Visitation will be 4:00 P.M. to 8:00 P.M. with a 7:00 P.M. prayer service at Hamilton Funeral Home on Sunday. Visitation will continue at the church on Monday, one hour prior to the service. Craig Anthony was born on December 10, 1968 in Robbinsdale, Minnesota to Paul and Joyce (Rooney) Hoefs. He graduated from Faith Christian Academy in Mankato in 1987 and went on to attend Trinity Bible College. He began his career with Alpha Wireless Communication. In 2002 he moved to Marshall to manage Alpha’s Marshall facility. On March 23, 2002, Craig was united in marriage to Misty Stephens in Spencer, Iowa. To this union they were raising three children, namely: Cassandra 20, Caitlin 17 and Kaden 8. He worked at Alpha Wireless Communication. The love of his life was his family and friends. He also enjoyed hunting (guns), fishing, golf, playing pool, motorcycling, and football (especially the Dallas Cowboys). He is loved and will be missed by his wife, Misty of Tracy; children, Cassandra of Tyler, Caitlin and Kaden both at home in Tracy; parents, Paul and Joyce of Mankato; sister, Lisa (and Chris) Miller of Madison Lake; father-in-law, Allen Stephens of LeGrand, IA; grandmothers, Ida Hoefs and Ruth Rooney of Park Rapids; also many relatives and friends. He was preceded in death by his sister, Kimberly; grandfathers, Edward Hoefs and Robert Rooney; mother-in-law, Pat Stephens; nephew, Mason Stephens; and best friend Lee Berris. Bless be the memory of Craig A. Hoefs.

The family of Craig Anthony Hoefs created this Life Tributes page to make it easy to share your memories.

Send flowers to the Hoefs family.