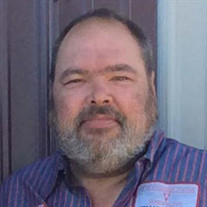 Curtis Dubbeldee, age 53, of Marshall, Minnesota, died Friday, December 25, 2020, with his Wife by his side peacefully at his home, due to esophageal cancer. Memorial Services are 11:00 a.m. Saturday, January 2, 2021, at Living Word Lutheran Church in Marshall, Minnesota. Interment will take place at a later date in the Russell Cemetery. A walk-through visitation will be held from 2:00 - 5:00 p.m. Friday, January 1, 2021, at the Living Word Lutheran Church in Marshall. The afternoon concludes with a prayer service at 4:30 p.m. Visitation will continue one hour prior to the service, from 10:00 – 11:00 a.m. on Saturday, again at the church. Occupancy limits and social distancing must be observed throughout all services. Masks are required at all public indoor gatherings. Curtis Leon Dubbeldee was born September 25, 1967, in Ivanhoe, Minnesota. He was the son of Leon and Corrine (Skorczewski) Dubbeldee. Curt was baptized in Ivanhoe, at Saints Peter and Paul Catholic Church, then received first communion and was confirmed at Holy Redeemer Catholic Church in Marshall. He grew up in Lynd and attended school in Russell and Lynd before graduating with the Marshall High School class of 1986. Curt also served in the National Guard for 6 years. Curt went onto Vocational School for Mechanics in Willmar, Minnesota, graduating in 1988. Curt married his high school sweetheart, Carmen Becker, on June 24, 1989. Curt started working on cars with his Uncle Dick when he was a child. In high school, he worked at Lockwood Motors before working at Gordy’s in Willmar while going to vocational school. Curt then moved back to Marshall and started at Tholen Auto. Curt and Carmen then started their business, Dubbeldee Repair, on July 1, 2005. They worked out of Lanoue’s Paintin’ Place until their new shop was built and they moved in on December 1, 2006. Curt loved working on all cars, especially the ones that others just could not figure out. He enjoyed going with his brothers to “back to the 50’s” car shows, and he was a member of Shades of the Past. Curt enjoyed guns and knives of all kinds and collected almost anything related to cars. He was a kind and honest mechanic that would not put a car on the road he wouldn’t put his children, wife, or mother in. Survivors include his wife, Carmen (Becker) Dubbeldee; son, Garrett (Rachel) Dubbeldee and grandchildren, Evelyn and Olivia, all of Minneota; daughter, Rachel (Brennan) Porter of Colfax, WI; mother, Corrine Dubbeldee of Marshall; sister, Brenda Dubbeldee (Scott Schafer) of Russell; brother, Kerry Dubbeldee of Russell; father-in-law, Ray Becker of Ten Sleep, WY; nephews, nieces, other family members, and friends. He was preceded in death by his paternal grandparents, Ray and Rosella Dubbeldee; step-grandpa, Leonard Lanoue; maternal grandparents, Harry and Bernice Skorczewski; father, Leon Dubbeldee; brother, David Dubbeldee; uncle, Dick Skorczewski; mother-in-law, Donna Becker; and stepmother-in-law, Phyllis Becker.

Curtis Dubbeldee, age 53, of Marshall, Minnesota, died Friday, December 25, 2020, with his Wife by his side peacefully at his home, due to esophageal cancer. Memorial Services are 11:00 a.m. Saturday, January 2, 2021, at Living Word Lutheran... View Obituary & Service Information

The family of Curtis Leon Dubbeldee created this Life Tributes page to make it easy to share your memories.

Send flowers to the Dubbeldee family.