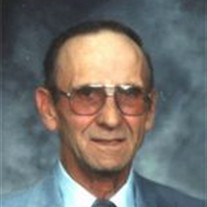 Dale Evans, age 73, of rural Balaton, passed away at his home on Thursday, March 26, 2009. Funeral services will be at 2:00 pm Tuesday, March 31 at the Grace First Church in Russell, with the burial following at the Russell Cemetery. Visitation will be 4:00-8:00 pm with a 7:00 pm prayer service Monday at the Hamilton Funeral Home. Visitation will continue at the church on Tuesday, one hour prior to the service. www.hamiltonfh.com Dale Leroy Evans was born to Emil and Alma (Swanson) Evans on October 25, 1935 in Island Lake Township, Lyon County Minnesota. He was baptized and confirmed in the Lutheran faith at the First English Lutheran Church in Marshall. Dale attended Lynd Public School and graduated in 1953. Following graduation, he attended the Institute of Agriculture at the University of Minnesota, St. Paul Campus. He returned home to farm with his father in Island Lake Township. In 1957, Dale joined the Marshall National Guard 151st A Battery and served twelve years. On July 9, 1959, Dale was united in marriage to Beverley Kramer at the Federated Church in Marshall. Together, they started their marriage and farming career on a farm in Rock Lake Township, Lyon County. Due to ill health, Dale retired from active farming in 1998.After retirement; he and Bev continued to raise Suffolk sheep and farm with his nephews and son, Corey. Dale was active throughout his lifetime in fields of farming, livestock production, and community and church activities. He served Grace Lutheran Church Council as treasurer, recording secretary, and auditing committees. He also was a faithful usher, maintenance man, and substitute Sunday school teacher. During his younger years, he was involved in the 4-H program and in later years, he served as a 4-H leader and officer on the Lyon County 4-H Advisory Committee. He was a former member of the Russell Lions and Tyler Golf Club. Spending time with his wife of forty-nine years and his family, especially his four grandsons was the highlight of his life. His encouragement, support, and work ethic will always be cherished. Whether it was family, relatives, or friends, Dale was there with a helping hand. Dale found enjoyment in playing cards with family and friends, watching and participating in sports, and spending hours in his farm shop. He is survived by his wife Beverley of Balaton; two children, Kim (Mike) Clayton of Alexandria and Corey (Jennifer) Evans of Balaton, four grandsons; Colin Evans of Canton, SD, Derek and Colton Evans of Balaton and Austin Clayton of Alexandria, two sisters; Adeline Prahl of Sleepy Eye and Loretta Breczinski of Marshall; two brothers; Norman (Virginia) Evans of Balaton and Kenneth (Connie) Evans of Anoka, brother-in-law; Calvin Kramer(Rhonda) of Marshall, and sister-in-law, Lorraine Evans of Russell, and many relatives and friends. He was preceded in death by his parents, infant daughter, three sisters; Mabel Vercruysse, Luella Nelson, Mae Sanderson,and three brothers; Harvid , Emil Jr., and Delbert Memorials preferred to the American Cancer Society and Prairie Home Hospice.

Dale Evans, age 73, of rural Balaton, passed away at his home on Thursday, March 26, 2009. Funeral services will be at 2:00 pm Tuesday, March 31 at the Grace First Church in Russell, with the burial following at the Russell Cemetery. Visitation... View Obituary & Service Information

The family of Dale L. Evans created this Life Tributes page to make it easy to share your memories.

Dale Evans, age 73, of rural Balaton, passed away at his home...

Send flowers to the Evans family.