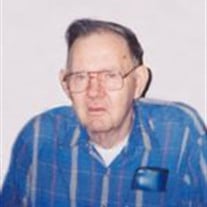 Redwood Falls: Dale Hefti, age 74, of Redwood Falls, formerly of Marshall, died on Wednesday, July 18, 2007 at the Sunwood Good Samaritan Care Center in Redwood Falls. Memorial Services will be 3:00 P.M. Saturday, July 21, 2007 at the Hamilton Funeral Home in Marshall. Burial will be in the Marshall Cemetery. Visitation will be one hour prior to the service at the funeral home. Dale Martin Hefti was born December 22, 1932 in Rock Lake Township, Minnesota to Martin and Frieda (VanBreasen) Hefti. Dale worked on the farm with his parents and then worked at a gas station in Balaton. He was united in marriage to Lucille Klitzke on January 21, 1961 in Pipestone, MN. He then started work at Lutz Garage in Marshall and later worked as a mechanic on implement equipment for Knutsen International. Dale was the caretaker of the Marshall Cemetery for nearly 20 years before his retirement 1989. Dale enjoyed cars, car shows, antique cars, motorcycles, and fishing. Dale passed away July 18, 2007. He reached the age of 74 years, 6 months, and 27 days. He is survived his wife, Lucy of Marshall; children, Doris Hefti (and Tom Bohnenstingl) and Amy Hefti (and Lee Wyffels) all of Marshall; and sister, Betty (and LeRoy) Bengston of Marshall. He was preceded in death by his parents, Martin and Frieda and brother, Neil Hefti. In lieu of flowers, memorials are preferred to the Good Samaritan Nursing Home in Redwood Falls. Blessed Be His Memory

The family of Dale Hefti created this Life Tributes page to make it easy to share your memories.