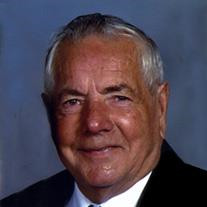 Dale “Butch” Elroy Schwantes, of Marshall, Minnesota, formerly of Marshfield, Wisconsin, passed away peacefully at his home on Monday, April 13, 2015. Monday was his 84th birthday. Memorial Services in Minnesota are 11:00 AM Friday, April 17, 2015, at the Hamilton Funeral Home in Marshall. Visitation will be one hour prior to the service, from 10:00 – 11:00 AM, Friday at the Hamilton Funeral Home in Marshall. Memorial Services in Wisconsin are 11:00 AM Monday, April 20, 2015, at Immanuel Lutheran Church in Marshfield, Wisconsin. Visitation will again be one hour prior to the service, from 10:00 – 11:00 AM, Monday at the church. Interment will follow in Hillside Cemetery, Marshfield, Wisconsin. Honorary Urn Bearers: Dale’s grandchildren Dale Elroy Schwantes was born on April 13, 1931, in Spencer, Wisconsin. He was the son of Edwin and Delia (Krause) Schwantes. Dale was baptized on May 17, 1931 and was later confirmed on July 23, 1944, both at Trinity Lutheran Church in Spencer. He attended Brighton School in Spencer and then lived in Marshfield, Wisconsin. On March 2, 1959, Dale was married to Nellie Parrett in Decorah, Iowa. The couple lived in Sheboygan, Cornell, and Black River Falls, Wisconsin, before moving to Marshall in 1970. They spent some time back in Marshfield, Wisconsin, before returning to Marshall in 2013. Dale and Nellie were blessed with 5 children: Rick, Scott, Clark, Mary, and Terry. Dale and Nellie shared over 56 years of marriage. Dale worked in Marshall as the city manager for Great Plains Natural Gas Company in Marshall for 27 years. Following his retirement there he worked at the Marshall Golf Club as a groundskeeper. Dale loved his family and cherished birthdays and special occasions where they would gather with friends. His enjoyments in life included fishing and hunting with his boys. He loved to golf and play Bingo, and bowl on the Marshall Business Men’s League. He lived to play dominoes and cards with his kids and grandchildren. A great storyteller, Dale always had a memory from his childhood days. He was very good in the kitchen and loved to cook and bake for his family. Before his health declined, He enjoyed trips to Michigan, Branson, and Las Vegas. Dale never missed “Wheel Of Fortune, “The Price Is Right,” or a Sunday afternoon with the Vikings. A true jokester, Dale would always bring a smile to your face. He will be dearly missed. His passing leaves a hole in the hearts of his loved ones, but he is in a better place. He watched over us on Earth and now from Heaven. Dale entered his heavenly home on his 84th birthday, April 13, 2015. Blessed be his memory. Dale is survived by his wife of 56 years, Nellie Schwantes of Marshall, MN; children, Rick (and Kathy) Schwantes of Willmar, MN, Scott (and Sharon) Schwantes of Hutchinson, MN, Clark Schwantes of Hutchinson, MN, Mary (and Robert) Claeys of Ghent, MN, Terry Schwantes of Waite Park, MN; 9 grandchildren, Amy, Malary, Cory, Amanda, Jordan, Afton, Lane, Tyler, Traci; 3 great-grandchildren, Alyssa, Gunner, Carter; sisters, Pat (and Ronald) Regele of Marshfield, WI, Ione Miller of Marshfield, WI; nephews, nieces, other relatives and many friends. Dale is preceded in death by his parents, Edwin and Delia Schwantes; sisters, Ruth Schade, Anita Griepentrog, Betty Schmoll; and brother, Gordon (Sam) Schwantes. The family invites attendees to a luncheon at the church following the committal service at the cemetery.

Dale &#8220;Butch&#8221; Elroy Schwantes, of Marshall, Minnesota, formerly of Marshfield, Wisconsin, passed away peacefully at his home on Monday, April 13, 2015. Monday was his 84th birthday. Memorial Services in Minnesota are 11:00 AM Friday,... View Obituary & Service Information

The family of Dale Elroy Schwantes created this Life Tributes page to make it easy to share your memories.

Send flowers to the Schwantes family.