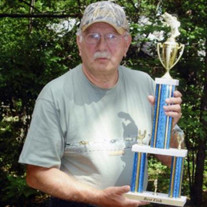 Dale Trulock, age 82, of Marshall, Minnesota, formerly of Milroy, Minnesota, died on Thursday, November 26, 2020, at the Heritage Pointe Senior Living Center in Marshall. A Public Celebration of Life is scheduled for 11:00 a.m. on Saturday, August 7, 2021, at Our Savior’s Lutheran Church in Milroy, Minnesota. Visitation will be held one hour prior to the service, from 10:00 a.m. – 11:00 a.m, also at the church. Dale Peder Trulock was born in Hendricks, Minnesota, on April 13, 1938, to the late Virgil and Hazel (Hoseck) Trulock. He was baptized and confirmed at First Lutheran Church in Hendricks. Dale started grade school in a country school south of Lake Hendricks where his parents farmed. Because of his father’s health, they moved to Hendricks in 1946. Dale then attended Hendricks Public School and graduated in 1956. During high school, he played football, basketball, baseball and ran track. He graduated from South Dakota State in 1960 with a BS Degree in Agriculture Education. He received his Masters Degree in Agriculture Education from South Dakota State in 1974. Dale enlisted in the U.S. Army in August of 1961, served as an Assistant Chaplin during the Cuban Crisis, and was honorably discharged in August of 1963. He then began his teaching career in Milroy, Minnesota, teaching Vocational Agriculture. Throughout his teaching career there, he brought many of his Ag judging teams to State competition. Dale was a well-liked teacher, was a good listener, had a good sense of humor, instilled a competitive spirit in his students, and made his students and athletes feel at ease. On June 19, 1965, Dale was united in marriage to Sharon Kalsbeek at the American Reformed Church in Orange City, Iowa. They then resided in Milroy, where he was teaching Vocational Agriculture, and Sharon began work as a medical lab technician in Marshall. Throughout his years of teaching in the Milroy School District, Dale was also the Track and Field Coach, even bringing some of his teams to State. Together, Dale and Sharon enjoyed camping with family and friends, going to the Wahlstrom’s cabin, sitting at campfires, and fishing with his nephews. They also enjoyed attending sporting events, supporting the local Milroy teams. Dale and Sharon loved the Lord, were dedicated members of Our Savior’s Lutheran Church, and had great fellowship with staff and church friends. After the Milroy school district closed, Dale worked at Jonti-Craft in Wabasso, Minnesota, was an insurance agent for Century Companies of America, and worked for Redwood County in the agricultural field. Dale loved his community and was very involved. He was a past president and board member of the Milroy Lions Club, a catcher for the Milroy Yankees Baseball team, a council member, President, Deacon and Trustee at Our Savior’s Lutheran Church, a member of Pheasants Forever, and was Parade Chairman for the Milroy Centennial Celebration. He was also an avid hunter of ducks, geese, and pheasants. Dale’s hobbies included vegetable and flower gardening, collecting old fishing lures, and collecting caps of which he had more than 200. Dale received many awards for his service to the school, clubs and community including (1) the first Zwach Spirit Award given to a person involved with the Milroy community, (2) the Lions Club Melvin Jones Fellow Award for humanitarian service, the highest honor given to a Lions Club member (3) the Redwood County Pheasants Forever Award for his commitment to conservation, (4) became a Lions International Hall of Fame Member, (5) Conference Track & Field Coach of the Year. Dale Trulock died on Thursday, November 26, 2020, at the age of 82 years, 7 months, and 13 days. Blessed be the memory of a loving husband, brother, uncle, and friend. He is survived by his wife of 55 years, Sharon Trulock of Minneota Manor in Minneota; sister, Carolyn (Keith) Wahlstrom of Bloomington; nieces and nephews, Daniel (Amy) Wahlstrom and great-niece Alexa Wahlstrom of Farmington, Darren Wahlstrom of Minneapolis, Alan Wahlstrom of Bloomington, Brian (Melia) Kalsbeek of Raleigh, NC, Sarah (David) With of Garner, NC, Jeff (Tannia) Kiyama of San Diego, CA, Dr. Lindsay Dale (John Scholtz) Kiyama of Salem, OR; brother-in-law, William “Bill” (Rebecca) Kalsbeek of Raleigh, NC; sister-in-law, Mary (Jack) Suite of Concord, CA; uncle, Doug (Ruth) Hoseck of Hector; special friends Ron Schmidt and Kay Wilson of Milroy; other relatives, and many friends. Dale is preceded in death by his parents, Virgil and Hazel (Hoseck) Trulock, along with many aunts, uncles, and cousins. Memorials and Cards can be mailed to Sharon Trulock Rm 403, Minneota Manor, 700 North Monroe St. P.O. Box 117, Minneota, MN 56264-0117. Memorials can be made to the Milroy Lions Club, Pheasants Forever, Our Saviors Lutheran Church, or a charity of your choice. Thank you to all care givers and staff at Heritage Pointe Senior Living in Marshall, MN. You are the best! Thank you to Hamilton Funeral Home staff for your caring support, and especially to Emily.

The family of Dale Peder Trulock created this Life Tributes page to make it easy to share your memories.

Send flowers to the Trulock family.