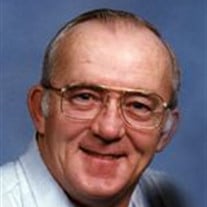 Dallas Fliss, age 76, of Marshall, passed away Friday, January 15, 2010 at Morningside Heights Care Center. Funeral services will be 1:00 P.M. Tuesday, January 19, 2010 at St. Stephen Lutheran Church in Marshall. Burial will be the Marshall Cemetery. Visitation will be held one hour prior to the service at the church. Arrangements are by the Hamilton Funeral Home in Marshall. Condolences may be submitted at www.hamiltonfh.com. Dallas Eugene Fliss was born to Clifford and Ethelyn (Lorenzen) Fliss on October 24, 1933 in Altamont, South Dakota. He was baptized August 28, 1934, at the Presbyterian Church in Canby and confirmed at Our Savior’s Lutheran Church in Canby on August 31, 1950. After graduating from Canby High School in 1952, Dallas served in the Navy during the Korean War, from 1955 to 1959. He spent went on to work for many years at Marshall Decorating as a painter. He retired about ten years ago. Dallas married Janet Mae Mann on July 27, 1956 in Marshall at the Methodist Church. He was a proud member of St. Stephen Lutheran Church. Other affiliations included the Marshall Gun Club and Redwood River Sportsman Club. Dallas enjoyed guns, gunsmithing, range shooting, deer hunting, coin collecting, and woodworking. He is survived by his children, Rick (and Cindy) Fliss of Charlotte, North Carolina, Jeff (and Beth) Fliss of Chanhassen, Jim (and Rhonda) Fliss of Eagan, and Jodie Fliss of Bethesda, Maryland; eight grandchildren, Michelle, Danielle, Peter, Emily, Kristina, and Christopher Fliss, and Emilie and Nicholas Meyers; one great-grandchild, Samara Wynne; and siblings, Norman (and Bernice) Fliss of Bellflower, California, Mimi Fliss (and Iner Markegard) of Thelan, California, Larry (and Barbara) Fliss of Hendricks, Charlene Fliss of Aiken, Doug (and Carol) Fliss of Detroit Lakes, and Greg (and Renee) Fliss of Aiken. He was preceded in death by his parents, Clifford and Ethelyn and his wife, Janet. Blessed be the memory of Dallas Fliss.

The family of Dallas Eugene Fliss created this Life Tributes page to make it easy to share your memories.

Send flowers to the Fliss family.