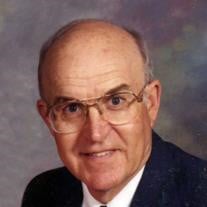 Darrell Hoyle, age 75, of Marshall, Minnesota, passed away on Monday, May 16, 2016, at the Minneota Manor Care Center. Memorial Services are 11:00 AM Wednesday, May 25, 2016, at Living Word Lutheran Church in Marshall. Reception to follow at the church. Clergy Officiating: Rev. Kelly Wasberg Organist: Allison Marshall Congregational Hymn: “This Is My Father’s World” Special Music: Jill Kontz, Soloist ~ “In The Garden,” “Amazing Grace” Darrell Duane Hoyle was born on December 7, 1940 in Ipswich, South Dakota. He was the son of Paul and Mildred (Heinz) Hoyle. Darrell was baptized in the Christian faith. He grew up in Ipswich and graduated from the Ipswich High School with the class of 1958. Darrell then enlisted in the United States Army in 1963 and was stationed in Italy before he was honorably discharged in 1965. Upon returning home, he went on to further his education at the University of Minnesota, Crookston and in 1968, earned an associate’s degree. Darrell joined Northwestern Farm Management Company in Minneapolis and opened a branch office in Marshall in 1969. In 1970, Darrell was united in marriage to Karen Sorenson in Marshall. The couple made their home there and raised a son, Duane. Darrell worked as farm manager, rural appraiser, and realtor until his retirement in 2007. In addition to his work, Darrell also enjoyed sailing, fishing, pheasant hunting, and being outdoors. He was proud of his flower and vegetable gardens. Darrell was a member of Living Word Lutheran Church in Marshall, active in the American Society of Farm Managers, and was a member of the Marshall American Legion, Post 113, where he served as past commander. Darrell entered his heavenly home on Monday, May 16, 2016, in Minneota, Minnesota at the age of 75 years, 5 months and 9 days. Blessed be his memory. Mourning his passing are his wife, Karen Hoyle of Marshall; son, Duane Hoyle of Orlando, FL; brothers, Warren (and Gail) Hoyle of Issaquah, WA, Bob (and Sue) Hoyle of Ipswich, SD, Glen (and Betty) Hoyle of Ipswich, SD, Loel (and Susie) Hoyle of Hayden, CO; sister, Charlotte (and Hank) Baker of Ipswich, SD; nephews, nieces, other relatives and many lifelong friends. He was preceded in death by his parents, Paul and Mildred Hoyle.

Darrell Hoyle, age 75, of Marshall, Minnesota, passed away on Monday, May 16, 2016, at the Minneota Manor Care Center. Memorial Services are 11:00 AM Wednesday, May 25, 2016, at Living Word Lutheran Church in Marshall. Reception to follow... View Obituary & Service Information

The family of Darrell Duane Hoyle created this Life Tributes page to make it easy to share your memories.

Darrell Hoyle, age 75, of Marshall, Minnesota, passed away on...

Send flowers to the Hoyle family.