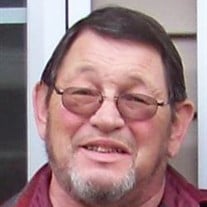 Marshall: David A. Gackstetter, age 64, of Marshall, passed away at Avera McKennen Hospital in Sioux Falls on Tuesday, June 10, 2014. Funeral services will be 10:30 A.M. Saturday, June 14th at First Lutheran Church. Visitation will be 4:00 P.M. to 8:00 P.M. Friday at the Hamilton Funeral Home. Visitation will continue at the church on Saturday, one hour prior to the service. Burial will be in the Marshall Cemetery. Military honors will be furnished by Marshall American Legion Post 113. David Allen Gackstetter was born on March 2, 1950, in Hendricks, MN to Howard and Deloris “Bonnie” (Hansen) Gackstetter. He was baptized and confirmed at Trinity Lutheran Church of Hendricks. David grew up in rural Hendricks near Lake Shaokatan, attended school at Hendricks High School and worked on his parents’ farm as a young man. He met his high school sweetheart, Linda (Herhusky) in 1966, and after David enlisted in the U.S. Army, the couple was joined in marriage on December 28, 1968 at Bethany Elim Lutheran Church in Ivanhoe, MN. The couple moved to San Antonio, TX, and Fort Leonard Wood, MO before David was deployed to Vietnam. David served our country as a Combat Medic from 1968-70 and was honorably discharged. After coming home David and Linda lived in Minnesota and settled in Marshall in 1980 where they lived for the last 34 years. David studied auto mechanics at Canby Vocational School and attended Southwest State University. Over the years David worked as a Psychiatric Technician at Willmar State Hospital, a truck driver, an auto mechanic, a land surveyor, and for many years in the maintenance department at Southwest State. He retired in 1999, and enjoyed spending time with his family and friends, traveling, fishing, camping, going to bingo, and playing cards. David was a life member of the American Legion (Marshall) and was active in the D.A.V. (Disabled American Veterans). David passed away on Tuesday, June 10, 2014, at Avera McKennan Hospital in Sioux Falls, SD, at the age of 64. Grateful for having shared his life are his wife: Linda, of Marshall, his children: Angie (Tom) Larson of Estherville, IA; Bethann (Gideon) Klogo of Sioux Falls, SD; and Stacy (Mike) Anderson of Marshall. Ten grandchildren: Tristan Fales, Trevor Fales, Mason Anderson, Tanner Fales, Dylan Larson, Sydney Larson, Collin Klogo, Avery Anderson, Aleyah Klogo, and Amaya Klogo. He is also survived by his sister, Judy (Lyle) Leins of Hendricks, his brother James Gackstetter of Marshall, and many nieces and nephews. He was preceded in death by his parents; two brothers Owen and Joel; and a great-nephew, Jay Hansen. Blessed be his memory.

The family of David Allen Gackstetter created this Life Tributes page to make it easy to share your memories.

Marshall: David A. Gackstetter, age 64, of Marshall, passed away...

Send flowers to the Gackstetter family.