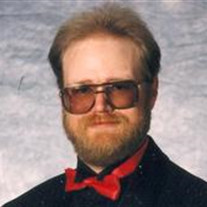 Marshall, David J. Garland, age 47, of Clifton Township, passed away at his residence on Monday, January 30, 2012. Memorial services are 2:00 P.M. Saturday, February 4th at the Hamilton Funeral Home. Visitation will be one hour prior to the service. David John Garland was born on August 5, 1964 to John and Delores (Jackson) Garland in Marshall. He was baptized and confirmed at Christ United Presbyterian Church. He graduated from the Marshall High School in 1983. David moved to Texas in 1985 where worked for a county survey crew and also was a security guard. He moved back to Marshall in 1987 and worked as a security guard, Swift Heartland and Greg Taylor. He was presently employed at Jonti-Craft, INC in Wabasso. His enjoyments in life were playing darts, shooting pool, bowling, playing horseshoe and keeping up with NASCAR racing. He was united marriage to Doreen A. Hankins on July 9, 1993 in Marshall. David passed away suddenly on Monday, January 30, 2012 at his residence in Clifton Township. He had reached the age of 47 years, 5 months and 25 days. He is survived by is wife, Doreen of Marshall; step-daughter, Chrissy (and Randy) Hook of Russell; step-granddaughter, Aubrey of Russell; father, John of Moody, Texas; his best friend, Pete Baerg of Marshall; mother-in-law, Shirley Hankins of Marshall, brother-in-law, Donald Hankins of Lynd, and sister-in-law, Donna Hankins of Marshall; his dogs, Smiley and Peanut; also many aunts, uncles and cousins. He was preceded in death by his mother, Delores; his paternal and maternal grandparents; sister-in-law, Cheryl Hankins; father-in-law, Duane W. Hankins; and brother-in-law, Duane D. Hankins.. Bless be the memory of David J. Garland.

Marshall, David J. Garland, age 47, of Clifton Township, passed away at his residence on Monday, January 30, 2012. Memorial services are 2:00 P.M. Saturday, February 4th at the Hamilton Funeral Home. Visitation will be one hour prior to the... View Obituary & Service Information

The family of David John Garland created this Life Tributes page to make it easy to share your memories.

Send flowers to the Garland family.