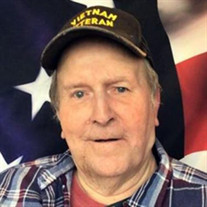 David Lavoie, age 77, of Minneapolis and formerly of Russell, Minnesota, died on Friday, February 11, 2022, at the Veterans Administration Hospital in Minneapolis, Minnesota. Funeral Services are 10:30 a.m. Friday, February 18, 2022, at the Balaton United Methodist Church in Balaton, Minnesota. Interment will follow in the Lakeside Cemetery, north of Balaton. Visitation will be held from 4:00 – 7:00 p.m. Thursday, February 17, 2022, at the Hamilton Funeral Home in Marshall. The evening will conclude with a Prayer Service at 7:00 p.m. Visitation will continue one hour prior to the service, from 9:30 – 10:30 a.m. on Friday, at the church. At the request of the family, masks use is recommended. Thank you for understanding. David Dean Lavoie was born September 22, 1944, in Lyon County, Minnesota. He was one of four boys born to Van and Lucille (LaValle) Lavoie. David grew up in the Florence and Russell areas and was baptized in the Methodist faith as a child. After attending Russell High School, he enlisted in the United States Army where David served his country during the Vietnam War. David returned home from the war to help care for his family and the family farm. He carried on the family farming tradition until his retirement. While David enjoyed working the land and spending time outdoors, he had a special appreciation for the cattle in his care. In September of 1975, David was united in marriage to Diana DeVos at Holy Redeemer Catholic Church in Marshall. To this union, one daughter was born, Rebecca. The small family made their home on the family farm. David and Diana later divorced in 2000. While David enjoyed going out to eat occasionally or just going for an afternoon drive, his favorite pastime was watching TV, particularly old Western movies and professional wrestling. David Dean Lavoie died on Friday, February 11, 2022, at the Veterans Administration Hospital in Minneapolis, Minnesota, at the age of 77 years, 4 months, and 20 days. Blessed be his memory. David is survived by his daughter, Rebecca (and Bertwood) Pendleton of Redwood Falls, MN; brother, Charles (and Maxine) Lavoie of Marshall; nieces, nephews, other relatives and many friends. David was preceded in death by his parents, Van and Lucille Lavoie; and brothers, Robert (Aino) Lavoie, Ronald (MaryEllen) Lavoie.

The family of David Dean Lavoie created this Life Tributes page to make it easy to share your memories.

David Lavoie, age 77, of Minneapolis and formerly of Russell,...