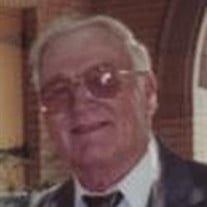 Russell: Dayle W. Swift, age 84, of Marshall, formerly of Russell, passed away at Avera Morningside Heights Care Center on Monday, June 2, 2014. Funeral services will be 10:30 A.M. Friday, June 6th at the Grace First Parish in Russell. Visitation will be 4:00 P.M. to 8:00 P.M. Thursday with a 7:00 P.M. prayer service at Hamilton Funeral Home. Visitation will continue at the church on Friday, one hour prior to the service. Burial will be in the Russell City Cemetery. Dayle Warner was born on September 10, 1929 in Tracy, Minnesota to Sayle and Mary (Withrow) Swift. He was baptized and confirmed at Congregational Church in Garvin, and graduated from Tracy High School in 1947. Dayle was united in marriage to Jeanene Coyle at the Congregational Church on January 11, 1952. To this union four children were born, namely; Paul, Diane, Gayle and Mark. They made their home and farmed in Island Lake Township. Dayle was very active in his community. He was on the Board of Directors for Lyon-Lincoln Electric Co-op for 36 years, East River Electric Co-op of Madison, SD for 18 years, Russell School board for 25 years, Russell Masonic Lodge for over 50 years and was an Elder for the First Presbyterian Church in Russell. The love of Dayle’s was spending time with his family and doing things for them. His other enjoyments included farming, fishing, traveling and promoting Lyon-Lincoln Co-op. He is survived by his wife, Jeanene of Marshall; four children, Paul (Elaine) Swift of Marshall, Diane (Walt) Gravley of Russell, Gayle (Frank) Holt of Plano, TX and Mark (Carla) Swift of Lakeville; ten grandchildren, Daren (Chelsey), Brian and Jason Gravley, Elizabeth, Matthew, Hannah, Jack and Charles Swift, Dustin Kirk and Lindsay (David) Berryman; three great grandchildren, Austin Kirk, Kyan and Talia Berryman; and two sister-in-laws, Verna Swift of Balaton and Gini Swift of Marshall. He was preceded in death by his parents; three brothers, Cecil, Raymond and Jesse Swift; and sister-in-law, Nona Swift. Blessed be the memory of Dayle W. Swift.

The family of Dayle W. Swift created this Life Tributes page to make it easy to share your memories.

Send flowers to the Swift family.