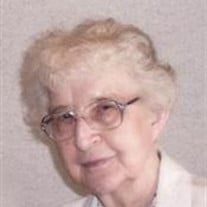 MMarshall: Delorus “Dee” M. Regnier, age 89, of Marshall, passed away at the Avera Morningside Heights Care Center on Saturday, December 29, 2012. Funeral services will be 2:00 P.M. Thursday, January 3rd at Hamilton Funeral Home. Visitation will be 5:00 P.M. to 7:00 P.M. Wednesday at the funeral home and continue at the funeral home on Thursday at 1:30 P.M.. Burial will be in the Marshall Cemetery. Dee passed away on December 29, 2012 at Morningside Heights Care Center in Marshall, MN. She was born October 5, 1923 on a farm outside of Marshall to Carl and Verda (Moore) Nelson. She attended school in Marshall and graduated from St. Cloud State College with a teaching degree in 1943. She taught first grade in Olivia, Willmar, and Medford, Oregon before marrying William (Bill) Regnier on October 8, 1949. The couple lived in St. Louis Park and Detroit Lakes before returning to Marshall in 1959. Dee resumed her career in 1964 and took pleasure and pride in teaching first graders until her retirement in 1985. After her retirement she continued to give to the community by volunteering at the Avera Auxiliary Thrift Shop for many years. Her chief enjoyments in life were spending time with her family (especially “Gram time” with her grandchildren) taking summer vacations to the mountains, reading, and collecting teddy bears. She is survived by her loving family: son Charlie (Rhonda) Regnier of Woodbury, MN, daughter Michelle Warme of Marshall, MN, honorary daughter Cathy (Rick) Schoephoerster of Marshall, MN; grandchildren DeAnna (Ryan) Dobratz of Hutchinson, MN, Anne Regnier of Mankato, MN, Matthew Regnier of Woodbury, MN, Christy (Kevin) Lonien of Marshall, MN, Emily Schoephoerster of Marshall, MN; great grandchildren Eli Dobratz and Lili Lonien; sister Corolyn Mortensen of Hastings, MN; and many other special nieces and nephews. Delorus is preceded in death by husband Bill Regnier, son-in-law Steve Warme, and sister Shirley Heideman. This lovely lady will be remembered in the hearts and lives of those who knew and loved her. Blessed be her memory

The family of Delorus "Dee" Marie Regnier created this Life Tributes page to make it easy to share your memories.