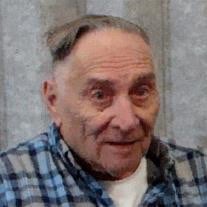 Dennis Erickson, age 79, of Marshall, Minnesota, passed away on Sunday, January 14, 2018, at the Minneota Manor Care Center. Funeral Services are 11:00 a.m. Saturday, January 20, 2018, at the Hamilton Funeral Home in Marshall. Following a reception at the funeral home, interment will be in the Marshall Cemetery. Visitation will be held one hour prior to the service, from 10:00 – 11:00 a.m., Saturday at the Hamilton Funeral Home. Dennis Erickson was born on April 30, 1938, in Tracy, Minnesota. He was the son of Paul and Ella (Gannott) Erickson. Dennis was baptized as an infant and went to Balaton school before graduating with the Balaton High School class of 1956. Dennis went on to serve his country in the United States Air Force from 1956 – 1960. He spent much of this time in Korea and California. Upon returning home, he met and then married Joan Kay Cornelson on September 29, 1962 at the Diamond Lake Lutheran Church in Lake Benton, Minnesota. The couple raised 3 children and lived in Marshall. Dennis and Joan shared 39 years of marriage before Joan died in 2001. Dennis worked as a parts manager for several companies including the O’Connell Dealer, Case Farm Equipment, and Schwan’s. He retired in 2001. Dennis was an active member of the Marshall Eagles Club, Marshall American Legion, and Marshall VFW. Dennis was an avid sports fan, watching the Vikings, Twins, Gophers, and Timberwolves. His other enjoyments in life included bowling, fishing, playing Bingo on Saturdays, and enjoying a beer at the Legion. Dennis is survived by his brother, Erik (Debbie) Erickson of Las Vegas, NM; 3 children, Steve (Sheri) Erickson of Cottonwood, Crystal (Loren) Eisenmenger of Clara City, Bob (Ellyn) Erickson of Blaine; 9 grandchildren, Paul (Emily) Erickson of St. Louis Park, Carrie Anne Erickson (Chris Livermore) of Tyler, Emily (Mitch) McKee of Lake Benton, Amanda Erickson of Sacred Heart, Sara Eisenmenger of Clara City, Nathan Eisenmenger of Clara City, Michael Erickson of Blaine, Natalie Erickson of Blaine, Shawn Erickson of Blaine; 7 great-grandchildren, Lola, Lillian, Lyric, Grayson, Bennett, Tilly, Ryder; nieces and nephews, other relatives and friends. He was preceded in death by his parents, Paul and Ella Erickson; wife, Joan Erickson; and infant great-grandson, Oliver.

The family of Dennis Paul Erickson created this Life Tributes page to make it easy to share your memories.