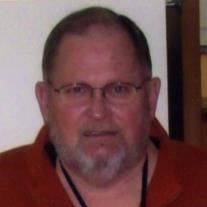 Dennis Dean Hefti, age 65, of Marshall, Minnesota, passed away on Thursday, November 12, 2015, at the Avera Regional Medical Center in Marshall. Memorial services are 11:00 AM Friday, November 20, 2015 at St. Stephen Lutheran Church in Marshall. Visitation will be held one hour prior to the service, from 10:00 - 11:00 AM at the church. Clergy Officiating: Rev. Lyle Snyder Organist: Mary Hauschild Congregational Hymns: Amazing Grace, Shall We Gather At The River, Jesus Shall Reign, Battle Hymn Of The Republic Dennis Dean Hefti was born on December 13, 1949 in Marshall, Minnesota. He was the son of Roy and Leona (Gutterman) Hefti. Denny was baptized at First English Lutheran Church and was later confirmed at St. Stephen Lutheran Church in Marshall. He attended school in Marshall and graduated with the Marshall High School class of 1967. Denny went on to further his education at Southwest State University. Denny worked for 33 years in law enforcement, both as a deputy with the Lyon County Sheriff’s Department and then as a police officer for city of Marshall. He mentioned that happiness came when he was able to help someone in need. He was a one-time member of St. Stephen Lutheran Church and was active in the Cub and Boy Scouts of America. Denny’s interests in life included music, camping, woodworking, photography, computers and technology. He liked mechanical tinkering and working on his cars and trucks. He will be missed. Dennis died on Thursday, November 12, 2015, in Marshall, Minnesota at the age of 65 years, 10 months and 30 days. Blessed be his memory. Denny is survived by his siblings, Bob (and Mary) Hefti of Brandon, MN, Sheri Wagner of Westchester, IL; nephews and nieces, Brian (and Kelly) Hefti of Sioux Falls, SD, Amy Hefti of Dallas, TX, Michael (and Jody) Hefti of Highland Ranch, CO, Tim (and Jackie) Wagner of Wauwatosa, WI, Dan (and Danielle) Wagner of Westchester, IL; other relatives and friends. He was preceded in death by his parents, Roy and Leona Hefti; infant sister, Linda; and brother-in-law, Tom Wagner. The family invites attendees to the fellowship hall for a luncheon following the committal.

The family of Dennis Dean Hefti created this Life Tributes page to make it easy to share your memories.