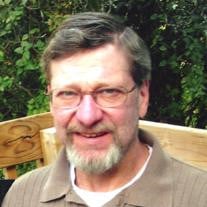 Dennis McChesney, age 67, of Marshall, Minnesota, passed away on Friday, March 8, 2019, at the Avera McKennen Hospital in Sioux Falls, South Dakota. Funeral Services are 3:00 p.m. Saturday, March 16, 2019, at St. Stephen Lutheran Church in Marshall. Interment will follow in the Marshall Cemetery. Visitation will be one hour prior to the service, from 2:00 – 3:00 p.m., Saturday, March 16, 2019, at St. Stephen Lutheran Church in Marshall. Dennis Philip McChesney was born to Cecil and Barb (Kanz) McChesney on January 29, 1952, in Marshall, Minnesota. He was baptized at First Lutheran Church and then Confirmed at St. Stephen Lutheran Church in Marshall. He grew up in Marshall, graduating from high school there in 1970. Denny worked at the local SuperValu, where he met his wife; did some farm construction for a few years before being hired at, then, Southwest State University. On June 8, 1973, Denny was united in marriage to Cheryl Kelly in Wabasso, Minnesota. They made their home in Lynd for a couple years before moving to Marshall where they have lived since. Denny served as the SMSU equipment manager for the Physical Education Programs for 20 years before transitioning to the janitorial crew. All told, Denny spent 33 years at the college and also ran Denny's Card Shop, a sports trading card store in Marshall from 1993 until 2011. Denny was active in softball, both as a player and a coach. He played on the church league and also on a Wooden Nickel team and coached a local woman’s softball team. He and Cheryl helped with Camp Courage, a summer day camp sponsored by Courage Center that held events in Marshall. Denny was also an artist who was proud of his acrylic paintings. His other enjoyments in life included walking his dogs, Izzy and MayZee, working crossword puzzles, bird-watching, camping, and usually winning at a game of Scrabble. Dennis McChesney died on March 8, 2019, in Sioux Falls, South Dakota, with family by his side. He had reached the age of 67 years, 1 month, and 8 days. Blessed be his memory. Denny is survived by his wife, Cheryl McChesney of Marshall; siblings, Judi Wiedenman of Seattle, WA, Duane (Tho) McChesney of Columbia, SC, Deb (Marlo) Moon of Cottonwood; nieces and nephews, other relatives, and friends. Denny was preceded in death by his parents, Cecil and Barb McChesney, and a brother, Bruce McChesney. In lieu of flowers, memorials are preferred to United Way of Marshall or the donor’s choice. Thank you.

The family of Dennis Philip McChesney created this Life Tributes page to make it easy to share your memories.

Send flowers to the McChesney family.