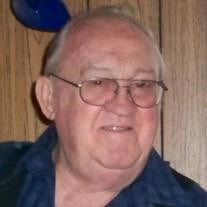 Dennis Gene Rokeh, age 81, of Russell, passed away on Monday, December 7, 2015, at the Sioux Falls VA Medical Center. Funeral Services are 2:00 PM Saturday, December 12, 2015, at Grace First Parish in Russell. Interment will follow in the Russell Cemetery. Visitation will be from 4:00 – 8:00 PM Friday, December 11, 2015 at the Hamilton Funeral Home in Marshall with a prayer service scheduled for 7:00 PM. Visitation will continue one hour prior to the service, from 1:00 – 2:00 PM, on Saturday at the church. Clergy Officiating: Rev. Bruce Drackley and Rev. Jeff Greathouse Organist: Beth Erdman Congregational Hymns: “Great Is Thy Faithfulness,” “On Eagle’s Wings,” “Mine Eyes Have Seen The Glory” Soloist: Darell Giles ~ “Jesus, Keep Me Near The Cross” Duet: Diane Gravley & Marilyn Gregg ~ “On The Wings Of A Dove,” “ Softly And Tenderly” Casket Bearers: Darin Gravley, Brian Besse, Brad Besse, Todd Gregg, Jason Rokeh, Scott Peterson, Shawn Peterson, Randy Gravley, Rollie Rokeh, Greg Rokeh, Jeff Rokeh, Larry Olson Dennis Gene Rokeh was born on August 3, 1934, in Florence, Minnesota. He was the son of Theodore and Amelia (Wood) Rokeh. Dennis was baptized as an infant and confirmed in his youth in the Presbyterian faith. Dennis attended Russell High School before joining the United States Army at age 18. He served 3 years in Korea and received his Honorable Discharge. While in Colorado, Dennis met Martha Scott. On January 1, 1955, Martha and Dennis were united in marriage in Colorado Springs. The couple lived there for many years while Dennis served as El Paso County Deputy Sheriff. In 1977, Dennis accepted a calling closer to home. He would be Chief of Police in Russell and Lynd. Dennis retired in 1999. They were blessed with over 60 years of marriage together before Martha died earlier this year. Dennis was an active member of Grace First Parish, the Russell American Legion, and Law Officer Association. His other enjoyments in life included auto body work, hunting, fishing, camping, and wintering with Martha in Arizona. Dennis Rokeh entered his heavenly home on Monday, December 7, 2015 at the age of 81 years, 4 months, and 4 days. Blessed be his memory. Dennis is survived by his siblings, Avis Gravley of Marshall, Marilyn Gregg of Marshall, Verlyn (and Nolly) Rokeh of Winter Park, FL, JoAnn (and Ed) Sepanik of Grand Rapids, MI; sister-in-law, Marcella Rokeh of Ivanhoe; many nephews, nieces, relatives and friends. Dennis is preceded in death by his parents, Theodore and Amelia Rokeh; wife, Martha Rokeh; and several brothers and sisters. The family invites attendees to the church basement for a luncheon following the interment.

The family of Dennis Gene Rokeh created this Life Tributes page to make it easy to share your memories.

Dennis Gene Rokeh, age 81, of Russell, passed away on Monday,...

Send flowers to the Rokeh family.