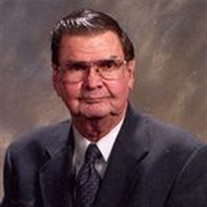 Cottonwood: Dennis Vien, age 77, of Cottonwood, passed away after a courageous battle with cancer at the Avera Marshall Regional Medical Center on Friday, May 14, 2010. Funeral services are scheduled for 2:30 P.M Thursday, May 20, 2010 at Christ Lutheran Church in Cottonwood. Burial in the church cemetery will follow the service. Visitation will be held Wednesday, May 19, from 5:00 P.M to 7:30 P.M. with a 7:00 P.M. prayer service at the Hamilton Funeral Home. Visitation will continue at the church on Thursday, one hour prior to the service. Dennis Vien was born on April 2, 1933 in Clarkfield, Minnesota to Roy A. and Minnie A. (Leroen)Vien. He was baptized April 23, 1933 at St. Lucas Lutheran Church and was confirmed June 15, 1947 at Silo (Christ Lutheran) Church. Dennis attended school in Cottonwood, graduating from High School in 1951. He began farming in Lucas Township and was united in marriage to Shirley Haag. To this union, three children were born; Doreen, David and Danette. Dennis bought the Insurance Service Agency in 1972 from Erv Schwartz and 18 years later, retired in 1990. Dennis married Gloria Koch in 1977. His enjoyments in life included fishing, eating (especially lutefisk), fishing, baseball (Minnesota Twins), fishing, horseshoe, fishing, bowling and also fishing. Dennis passed away after a courageous battle with cancer at the Avera Marshall Regional Medical Center on Friday, May 14, 2010. He had reached the age of 77 years, 1 month and 12 days. Surviving Dennis are his three children, Doreen (and David) DeVos of West Fargo, ND, David Vien of Cottonwood and Danette (and Mike) Stoks of Marshall; five grandchildren, Chad, Joel, Derek, Gunnar and Courtney; a sister, Elene (Glenn) Hegna of Bird Island; and also two nieces and one nephew. He was preceded in death by his parents and both his wives. Dennis was a faithful member of Christ Lutheran Church, where he served in several positions. He also was a member of the Cottonwood Lions Club. He was always very active in his community and always helping others. He enjoyed catching, cleaning and giving his fish away. Blessed Be The Memory Of Dennis Vien

Cottonwood: Dennis Vien, age 77, of Cottonwood, passed away after a courageous battle with cancer at the Avera Marshall Regional Medical Center on Friday, May 14, 2010. Funeral services are scheduled for 2:30 P.M Thursday, May 20, 2010 at Christ... View Obituary & Service Information

The family of Dennis R. Vien created this Life Tributes page to make it easy to share your memories.

Cottonwood: Dennis Vien, age 77, of Cottonwood, passed away after...

Send flowers to the Vien family.