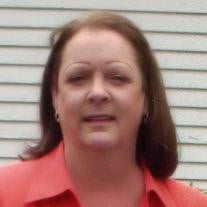 Diane M. Anderson, age 61, of Marshall, Minnesota, passed away on Thursday, January 21, 2016, at Avera Morningside Heights – Transitions in Marshall, Minnesota. Memorial Services are 6:00 PM Monday, January 25, 2016 at the Hamilton Funeral Home in Marshall. Visitation will be held leading up to the service, from 3:00 – 6:00 PM Monday, January 25, 2016 at the Hamilton Funeral Home in Marshall. Clergy Officiating: Rev. Jim Demke Congregational Hymns: Amazing Grace, Borning Cry Special Music: The Lord’s Prayer, How Great Thou Art ~ Eric Anderson, Soloist Diane Marie Fligge was born September 29, 1954, in Marshall, Minnesota. She was the daughter of Robert and Eileen (Hamilton) Fligge. Diane graduated from Marshall High School in 1972 and went on to start her career with The Schwan's Food Company. On December 30, 1977, Diane was united in marriage to Eric Anderson in Albert Lea, Minnesota. The couple made their home in Cottonwood, Minnesota and had a daughter, Siri. Diane worked in various administrative jobs at Schwan's, both in marketing and with the executive offices. Diane was a kind, considerate, trustworthy person who enjoyed socializing. She looked forward to gatherings at the lake. She loved animals and wildlife, especially horses. Diane liked puzzles and spending time with those she loved. She will be dearly missed. Diane died on Thursday, January 21, 2016, in Marshall, Minnesota at the age of 61 years, 3 months and 23 days after a short but courageous battle with cancer. Blessed be her memory. Diane is survived by her daughter, Siri (and Billy) of Brookings, SD; siblings, Cherie (and Roger) Bagstad of Asbury, IA, Susan Halliday (and Mark) of Arco; nieces and nephew, Kristi Bagstad of Dubuque, IA, Tim (and Erica) Bagstad of St. Louis Park, Jennifer Halliday of Versailles, KY; great-niece and nephew, Clara and Nathan Droessler; other relatives and many friends. Diane was preceded in death by her parents, Bob and Eileen Fligge; infant brother, Gary Fligge; aunts, uncles, and extended family.

The family of Diane Marie Anderson created this Life Tributes page to make it easy to share your memories.