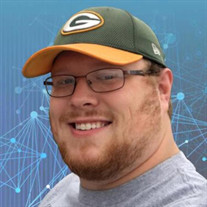 Dillon Sommervold, age 29, of Marshall, Minnesota, died unexpectedly in his sleep on Thursday, February 10, 2022, at his home. Funeral Services are 11:00 a.m. Thursday, February 17, 2022, at First Lutheran Church in Marshall. Visitation will be held from 4:00 – 8:00 p.m. Wednesday, February 16, 2022, at the Hamilton Funeral Home in Marshall. A Prayer Service is scheduled for 7:00 p.m. Visitation will continue one hour prior to the service, from 10:00 – 11:00 a.m. on Thursday, at the church. Dillon Oshae Sommervold was born February 25, 1992, in Hendricks, Minnesota. He was the son of Jody and Melissa (Vick) Sommervold. Dillon was baptized in the fifth grade in the Lutheran Faith and then was confirmed during high school in the Catholic church. He attended school in Hendricks and Ivanhoe, ultimately graduating with highest honors from Lincoln High School with the class of 2010. Dillon then furthered his education at Lake Area Technical College in Watertown, South Dakota, where he was proud to again earn highest honors. Dillon’s degree in Electronic Systems Technology integrated him immediately into his career. After graduating from college, Dillon moved to Marshall and began working for BH Electronics with his father. He started as an assembler and worked up to test area technician but also did a lot of programming, training, and writing of test programs. It was also at BH Electronics that he met the love of his life, Stephanie Condon, whom he adored for the past four and a half years. Dillon quickly became a role model for her son, Caelen. He taught him about video games and electronics. Dillon was Caelen’s go-to for help when struggling with math and other areas. Dillon was a bright mind, skilled in all things electronic. He often would help family and friends with needed repairs, and he enjoyed upcycling used computer parts to build his own system. Dillon inherited an artistic talent from his mother and was quite skilled at drawing. He enjoyed being with family and checked in on them often. Dillon took pride in being an older brother to all his siblings and he shared with them his interests like video games, movies, anime, and Japanese music. He also enjoyed playing guitar and spent hours watching Sci-Fi and Horror movies. God called Dillon home on Thursday, February 10, 2022, just 15 days before his 30th birthday. Blessed be his memory. He is survived by the love of his life, Stephanie Condon of Marshall; step-son, Caelen Condon of Marshall; father, Jody (Penny) Sommervold of Marshall; mother, Melissa (Brian) Skorczewski of Canby; grandmother, Alice Vick of Echo; siblings, Dustin Sommervold of Marshall, Austin Sommervold of Marshall, Desiree Skorczewski of Watertown, SD, Ryan Skorczewski of Canby, Brianna Skorczewski of Canby; good friend, Kellen Engen of Hendricks; aunt, uncles, other relatives and many friends. Dillon was preceded in death by his beloved yellow lab, Ginger; and grandparents, Ardis Sommervold, Don Streich, and Darwin Vick.

The family of Dillon Oshae Sommervold created this Life Tributes page to make it easy to share your memories.

Send flowers to the Sommervold family.