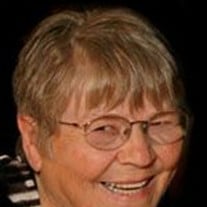 Green Valley: Dolores E. Bossert, age 76, of Green Valley, passed away at the Avera Marshall Regional Medical Center on Friday, July 2, 2010. Funeral services will be 2:00 P.M. Tuesday, July 6th at the English Lutheran Church in Cottonwood. Burial will be in the church cemetery. Visitation will be 4:00 P.M. to 8:00 P.M. with a 7:00 P.M. prayer service Monday at the Hamilton Funeral Home. Visitation will continue at the church on Tuesday, one hour prior to the service. Dolores Elaine Rowley was born October 1, 1933 on a farm south of Firesteel, South Dakota to Fred and Grace (Wheat) Rowley. She attended school in Firesteel and graduated from Timber Lake High School. On November 18, 1951 she was united in marriage to Edward “Eddie” Harold Bossert in Firesteel. To this union, eight children were born. They made their home on a farm nearer McIntosh, SD for a few years and then moved to Firesteel where they worked on a ranch. Dolores and Eddie moved to Green Valley, Minnesota in 1957, where they resided the rest of their married life. After Eddie passed away in November 2000, Dolores continued to live in their home until entering Minneota Manor. Dolores stayed at home and raised her family during the early years. She then went to work first at Mike’s Café and then at Borch’s Sporting Goods in Marshall for over 29 years, retiring in 1998. Dolores began working part time in 1999 at Just A Buck in Marshall. Dolores was a faithful member of the English Lutheran Church in Cottonwood. She enjoyed crocheting and puzzles of all kinds, but mostly she loved spending time with her grandchildren and great grandchildren. She also enjoyed volunteering at the Marshall Area Adult Center and the Hospital Thrift Store. Dolores passed away at the Avera Marshall Regional Medical Center on Friday, July 2, 2010. She had reached the age of 76 years, 9 months and 1 day. Dolores is survived by her eight children; Nadine (Larry) Vierstraete and Mauretta (Steve) Versluys both of Marshall, Kelly (Gene) Johnson of Huron, South Dakota, Jody (Rick) Barringer of Prior Lake, Stacy Kerkaert of Worthington, Curtis (Paula) of Mankato, Stuart (Sharon) of Omaha, Nebraska, and Jana Bossert of Boyceville, Wisconsin; one brother, Farrell (Janet) of Colorado Springs, Colorado; one sister in law, Paulette of Eagle Butte, SD, 19 grandchildren and 18 great grandchildren; and many nieces and nephews. Dolores was preceded in death by her parents, her husband, Eddie; an infant grandson Alex; two brothers, Erwin (Jr.) and Dale, an infant sister, Lorraine and one sister in-law, Edna. Blessed Be The Memory of Dolores Elaine Bossert. Family requests memorials be designated to Marshall Area Adult Center.

The family of Dolores Elaine Bossert created this Life Tributes page to make it easy to share your memories.

Send flowers to the Bossert family.