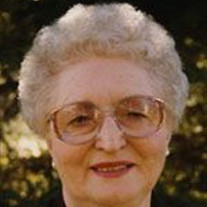 Marshall: Dolores Van Dromme, age 87, of Marshall, passed away at the Avera Heart Hospital of South Dakota in Sioux Falls, on Friday, April 2, 2010. Mass of Christian Burial will be 10:30 a.m. Tuesday, April 6, 2010 at the Church of the Holy Redeemer. Burial will be in the Calvary Cemetery. Visitation will be 4:00 to 8:00 p.m. Monday with a 7:00 p.m. prayer service followed by a Rosary service at the Hamilton Funeral Home. Visitation will continue at the church on Tuesday, one hour prior to the service. Dolores was born to Henry and Susan (Eilen) Peppersack on August 10, 1922 in St. Leo, Minnesota. She was baptized, received first communion and was confirmed in the Catholic faith. She attended school in St. Leo and Canby, and received her GED in 1975. During World War II she worked in support of the war effort at Marshall Produce, Jordon Electric and O.B. McClock. On February 4, 1950, Dolores was united in marriage to Camiel Van Dromme at the Church of the Holy Redeemer in Marshall. Camiel worked on road construction and Dolores traveled with him. After their daughter, Suzette, was born she was a stay at home mom. She later went to work at the Corner Café for George and Margaret Hentges, as well as cleaned house for Frankie and Evie Beernaert. She then went to work at the Dietary Department at the Weiner Memorial Hospital. In 1998, after 31 years of service, she retired. Camiel passed away July 29, 1971. Dolores passed away at the Avera Heart Hospital of South Dakota in Sioux Falls on Friday, April 2, 2010. She had reached the age of 87 years, 7 months and 22 days. She is survived by her daughter, Suzette, and son-in-law, Thomas Westhoff of Fredericksburg, VA; three grandchildren, Christopher, Steven and Lisa Westhoff; two sisters, Amalia Vlach of Mound, MN and Charlotte Hentges of St. Bonifacius, MN; also many other relatives and friends. She was preceded in death by her parents, husband, and six siblings; Marcella Van Leeuwee, Lawrence Peppersack, Caroline Bornitz, Alphonse Eilen, Anna Marie Goodale and Eugene Peppersack. Dolores was a faithful member of the Church of the Holy Redeemer and was active in the ladies guild. She also was a member of the VFW Post 742 Auxiliary. Dolores’ family was very important to her and she corresponded with them regularly by phone and letters. She enjoyed reading, doing crosswords or word searches and taking care of her plants. Her favorite television programming was WETA. Blessed be the memory of Dolores Van Dromme

Marshall: Dolores Van Dromme, age 87, of Marshall, passed away at the Avera Heart Hospital of South Dakota in Sioux Falls, on Friday, April 2, 2010. Mass of Christian Burial will be 10:30 a.m. Tuesday, April 6, 2010 at the Church of the Holy... View Obituary & Service Information

The family of Dolores Van Dromme created this Life Tributes page to make it easy to share your memories.

Send flowers to the Dromme family.