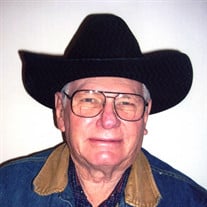 Donald Goslar, age 84, of Ghent and formerly of Marshall, Minnesota, passed away on Friday, November 3, 2017, at Divine Providence Care Center in Ivanhoe, Minnesota. Funeral Services are 11:00 a.m. Friday, November 10, 2017, at First Lutheran Church in Marshall, Minnesota. Interment will follow in the Marshall Cemetery. Visitation will be held from 4:00 – 8:00 p.m. Thursday, November 9, 2017, at the Hamilton Funeral Home in Marshall. A prayer service is scheduled for 7:00 p.m. Visitation will continue one hour prior to the service, from 10:00 – 11:00 a.m., Friday at the church. Donald LeRoy Goslar was born at home, on February 25, 1933, on the family farm in Lac Qui Parle county, Minnesota. He was the son of Herman and Mabel (Johnson) Goslar. Don was baptized as an infant and later confirmed in his youth in the Lutheran Church. Don graduated from Lac Qui Parle country school while helping his folks on the home farm. Don was united in marriage to Shirley Arndt on October 13, 1952 in Madison, Minnesota. The couple made their home briefly on a farm before moving to Marshall where they spent a majority of their lives and raised 4 children: LeRoy, Donna, Donald, and James. Don worked as a mechanic at Banbury Implement which switched to Bill’s Oliver later in his career. Don groomed, broke, and shoed horses and was a reserve for the Marshall Police Department and Lyon County Sheriff. The couple moved to Ghent in 1984. Don owned his own business there, Don’s Repair, before retiring in 2006. Shirley passed away that same year after 54 years of marriage together. Don was a member of the Marshall Eagle’s Club, Blue Knights Motorcycle Group, Circle Star Saddle Club, and First Lutheran Church in Marshall. His enjoyments in life included pistol league where he was awarded a Law Enforcement Top Shooter, hunting, fishing, horses, trail riding, family trips to Wyoming, camping, their Lake Shetek Cabin, and his dogs. He always had a stick of gum and a big hug for the grandchildren; he will be deeply missed by all. Don Goslar passed away on Friday, November 3, 2017, in Ivanhoe, Minnesota, at the age of 84 years, 8 months, and 9 days. Blessed be his memory. Don is survived by his 4 children, LeRoy Goslar of Vancouver, WA, Donna (Larry) Swanson of Marshall, Don (Jean) Goslar of Marshall, Jim Goslar of Des Moines, IA; former daughter-in-law, Beverly Juhl of Omaha, Nebraska; 15 grandchildren; 18 great-grandchildren; 2 great-great-grandchildren; significant other, LaDonna Rathje of Marshall; brother, Vern (Joyce) Goslar of Garvin; sister, Joanne Thompson of Marshall; nephews, nieces, other relatives and many friends. He was preceded in death by his parents, Herman and Mabel Goslar; his wife Shirley; daughter-in-law, Sharon Goslar; sister, Marie Engebretson; and his dogs, Dolly and Buddy.

The family of Don LeRoy Goslar created this Life Tributes page to make it easy to share your memories.

Donald Goslar, age 84, of Ghent and formerly of Marshall, Minnesota,...

Send flowers to the Goslar family.