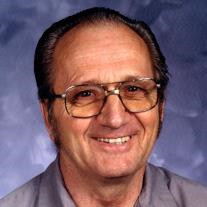 Donald Kepler, age 78, of Medford and formerly of Marshall, Minnesota, passed away unexpectedly on Tuesday, January 23, 2018, at his home in Medford. Memorial Service will be 2:00 p.m. Saturday, January 27, 2018, at the Hamilton Funeral Home in Marshall. Military honors to follow, provided by the American Legion, Post #113. Visitation will be held one hour prior to the service, from 1:00 – 2:00 p.m. on Saturday, at the Hamilton Funeral Home in Marshall. Donald James Kepler was born on May 24, 1939, in Slayton, Minnesota. He was one of eleven children born to Leo and Frances (Reinsma) Kepler. Don was baptized as an infant and confirmed in his youth at the Assembly of God Church in Slayton. He attended school in Slayton before joining the United States Army. He served his country from 1957 – 1960. Upon returning home he met Ms. Constance Slaight. On June 10, 1961, Don and Connie were married at the Methodist Church in Slayton. They lived there briefly before moving to Marshall to raise their daughter, Sharon. The couple was married for 56 years this past June. Don worked at the Costal and Derby Stations in Marshall and he did maintenance at Holy Redeemer Catholic School in Marshall. In 2003, He and Connie moved to Medford to be closer to Sharon and he worked school maintenance in Northfield and he most recently was working part-time at Walmart in Owatonna. He was a past member of the Eagles Club in Marshall. His enjoyments in life included hunting and spending time with family, but he loved watching Dale Earnhardt, Sr. and others in NASCAR. Don died on January 23, 2018, at the age of 78 years, 7 months, and 30 days. He will be dearly missed. Don is survived by the love of his life, Connie Kepler of Medford; daughter, Sharon (Stacey) Miller of Bloomington; granddaughter, Sara Miller of Eagan; 7 siblings, Vern (Bonnie) Kepler of Fargo, ND, Ruth Roeder of Slayton, Neva (Dave) Swanson of Slayton, Les Kepler of Avoca, Philip (Cindy) Kepler of Bethel, ID, Dave Kepler of FL, Gloria McMann of Dove Creek, CO; nieces and nephews, other relatives and friends. He was preceded in death by his parents, Leo and Frances Kepler, and 3 siblings, Alice Wixon, Robert Kepler, and Sandy Kepler. Blessed be his memory.

Donald Kepler, age 78, of Medford and formerly of Marshall, Minnesota, passed away unexpectedly on Tuesday, January 23, 2018, at his home in Medford. Memorial Service will be 2:00 p.m. Saturday, January 27, 2018, at the Hamilton Funeral Home... View Obituary & Service Information

The family of Don James Kepler created this Life Tributes page to make it easy to share your memories.

Donald Kepler, age 78, of Medford and formerly of Marshall, Minnesota,...

Send flowers to the Kepler family.