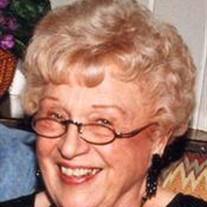 Milroy: Dona M. Petersen, age 89, of rural Milroy, passed away at the Sanford Tracy Medical Center on Wednesday, August 10, 2011. Funeral services will be 10:30 A.M. Saturday, August 13th at Our Saviors Lutheran Church in Milroy. Burial will be in the Redwood Falls Cemetery. Visitation will be one hour prior to the service at Our Savior's Lutheran on Saturday. Hamilton Funeral Home is in charge of the arrangements. Dona M. Petersen was born on November 3, 1921 in Tracy, Minnesota to Elmer and Anna (Ellingson) Welter. She was baptized and confirmed at Our Saviors Lutheran Church in Milroy. She graduated from the Milroy High School in 1939 and went on to attend the Mankato Teachers College. Upon graduation, she earned her first teaching job in Wilder, Minnesota. On November 13, 1943, Dona was united in marriage to Warren Petersen in Milroy. They lived on a farm near Milroy where they farmed and raised two children, Dennis and Steve. Dona taught at Milroy Public School for 20 years and was a faithful member of Our Saviors Lutheran where she taught vacation Bible School, was a member of the W.E.L.C.A, and was the church organist for 61 years. Her enjoyments in life were teaching piano lessons, spending time at Lake Mary near Alexandria, family get-togethers, baking, tending flower gardens, bowling, and crocheting. Dona enjoyed life to the fullest and passed away on Wednesday, August 10, 2011 at the age of 89 years, 9 months and 7 days. She is survived by her son, Steve (and Cindy) Petersen of Milroy; six grandchildren, Gail (and Bruce) Dennin of Hector, Melissa (and Mike) Hall of Austin, Edward Petersen of Austin, Leslie (and John) Murphy of Pierre, SD, Nathan Petersen of Milroy, and Troy (and Tara) Petersen of Glencoe; six great grandchildren, Cody and Taylor Dennin, Warren and Rebecca Hall, and Riley and Troy Petersen, Jr. . She was preceded in death by her parents; husband, Warren; son, Dennis; and brother, Gene. Blessed Be The Memory Of Dona M. Petersen

The family of Dona M Petersen created this Life Tributes page to make it easy to share your memories.