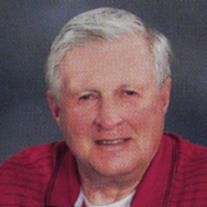 Donald Cameron Bleloch, age 79, of Marshall, Minnesota, passed away on Sunday, April 3, 2016, at the Avera McKennan Hospital in Sioux Falls, South Dakota. Memorial Services are 3:00 PM Saturday, April 9, 2016, at Cornerstone United Methodist Church in Marshall. Interment will follow in the Marshall Cemetery. Visitation will be held one hour prior to the service, from 2:00 – 3:00 PM, on Saturday at the church. Clergy Officiating: Rev. David Johnston Organist: Cheryl Jeska Special Music: The Lord’s Prayer Congregational Hymns: Onward Christian Soldiers / Eternal Father (Navy Hymn) / Great Is Thy Faithfulness Military Honors: Marshall American Legion ~ Post #113 Donald Cameron Bleloch was born on October 9, 1936, in Chicago, Illinois. He was the son of Richard and Margaret (Broomell) Bleloch. Don was baptized as an infant at the Church of Atonement in Chicago and was later confirmed at Christ Episcopal Church in Winnetka. He attended school in Chicago, graduating from New Trier High School in 1955. Don furthered his education at the Warton School of Business at the University of Pennsylvania. After graduating in 1959, Don served in the United States Navy for 3 years, serving in Japan between the Korean and Vietnam wars. Upon returning home, Don worked as an accountant and his eyesight began to decline. He enrolled at the Cincinnati School for the Blind where he learned computers and data processing. On August 16, 1969, Don was united in marriage to Jayne Beard at the Community Church in Republic, Ohio. The couple moved around a lot before settling in Marshall about 30 years ago. Don worked as an accountant for the Schwan’s Food Company before he retired. Don and Jayne shared over 46 years of marriage. Don was an organized person with a strong faith. He was a member of the Marshall Lions Club, Masonic Lodge, Blind Bowling league, the Boy Scouts of America – achieving Eagle Scout, and Cornerstone United Methodist Church in Marshall. Despite his vision challenges, Don loved crossword puzzles, reading the newspaper, and bowled a 298. For the last 15 years, Don enjoyed wintering in Texas with his wife and sister. Donald Cameron Bleloch went to his heavenly home on Sunday, April 3, 2016, at the age of 79 years, 5 months, and 25 days. Blessed be his memory. Don is survived by his wife, Jayne Bleloch of Marshall; sister, Eleanor Bleloch of Marshall; nephews, nieces, other relatives and many wonderful friends. He is preceded in death by his parents, Richard and Margaret Bleloch.

The family of Donald Cameron Bleloch created this Life Tributes page to make it easy to share your memories.

Send flowers to the Bleloch family.