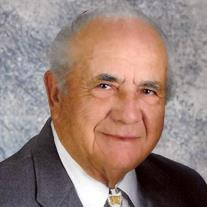 Donald James Brosseau, age 88, of Marshall, MN passed away on Thursday, January 3, 2019. A memorial gathering of family and friends will be held on Monday, January 7, 2019 from 1:00 – 3:00 pm at the Hamilton Funeral Home. Donald James Brosseau was born July 8, 1930, to Eugene and Francis (Langin) Brosseau in Marshall, MN. He grew up on the family farm near Lynd, MN. Donald was baptized, received first communion, and was confirmed in the Catholic faith. He attended school in Lynd, graduating with the class of 1948. After several years of work with area farmers, he took over the family farm from his Dad. On August 21, 1951, Don was united in marriage to Margie Castle in Marshall. The couple made their home on the family farm in 1954 and raised 6 children: Sandy, Debbie, Doug, Kathie, Diane, and Carol. They farmed for 60 years until retirement and then Don and Margie moved into their new home in Marshall. Don and Margie shared over 67 years of marriage together. Farming and family were Don’s life passions. He also enjoyed years of horse shows and rodeos with his kids which developed into road trips to see family and friends when time would allow. Over the years their travels took them to many parts of the United States as well as New Zealand. Winters were spent in Hawaii and then later in Florida for a number of years. Don particularly enjoyed the many cruises they took together. Donald is survived by his loving wife, Margie Brosseau; children, Sandy (Howie) Steenhoven of Marshall, MN; Debbie (Gordon) Cleveland of Custer, SD; Doug (Jeana) Brosseau of Albuquerque, NM; Kathie (Allan) Nelson of Chanhassen, MN; Diane Helmin (fiancé Les Weitzel) of Harris, MN; Carol Brosseau of Albuquerque, NM; 8 grandchildren; 16 great-grandchildren; 4 great-great-grandchildren; and many other relatives and friends. Don was preceded in death by his parents, Eugene and Francis Brosseau; brother, Gene (Judy) Brosseau; grandson, David Petersen; and son-in-law, Chill Helmin. In lieu of flowers, the family is asking that memorials be sent to a Veterans Organization of your choice. Thank you.

The family of Donald James Brosseau created this Life Tributes page to make it easy to share your memories.

Donald James Brosseau, age 88, of Marshall, MN passed away on...

Send flowers to the Brosseau family.