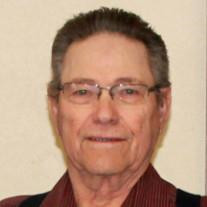 Donald E. Coudron, age 80, of Marshall, passed away on Friday, September 25, 2015, at his home in Marshall. Mass of Christian Burial is 10:30 AM Tuesday, September 29, 2015 at Holy Redeemer Catholic Church in Marshall. Interment will follow in the Calvary Catholic Cemetery in Marshall. Visitation will be held from 4:00 – 8:00 PM Monday, September 28, 2015 at the Hamilton Funeral Home in Marshall. A Rosary will be held at 4:00 PM and a prayer service is scheduled for 7:00 PM. Visitation will continue one hour prior to the service, from 9:30 – 10:30 AM, on Tuesday at the church. Clergy Officiating: Rev. Father Paul Wolf Organist: Monty Recker Congregational Hymns: How Great Thou Art, Psalm 23, Amazing Grace, On Eagle’s Wings, O Loving God, Battle Hymn of the Republic Active Casket Bearers: Judy VanOverbeke, Antonio Garcia, Angelica Garcia, Marisol Limones, Char Johnson, Mike Kor, KristafferCoudron, Justine Hughes Honorary Casket Bearers: Donald’s grandchildren and great-grandchildren Donald E. Coudron was born on September 23, 1935 in Stanley Township, Minnesota. He was the son of Emil and Alma (Boudreau) Coudron. Donald was baptized, received first communion, and was confirmed at Holy Redeemer Catholic Church in Marshall, Minnesota. He grew up on the family farm and attended country school before returning home to help on the farm. Donald also served in the United States Army for 4 years and was honorably discharged November 30, 1963. On February 17, 1962, Donald was married to Kathy Paul at Holy Redeemer Catholic Church in Marshall. They shared over 53 years of marriage together and had 5 children, Richard, Timothy, Martin, Beverly, and Susan. The couple made their home in the Marshall area until 1979, when Donald was done farming. They moved to Worthington where he drove truck for the Implement dealer there. Then, in 1984, they moved back to Marshall and Donald worked for Taylor’s and most recently, Arnold Motors. Due to health concerns, he retired this year. Donald was a member at Holy Redeemer Catholic Church and was a very traditional guy, loved his routine, and was known for his saying, “yeah, yeah, yeah…” His other enjoyments in life included watching NASCAR, and other races, playing Bingo, Wahoo, Bean Bags, and cards, and his beloved dogs, Mugzi and Jane. He always put family first and loved spending time with his children, grandchildren, and great-grandchildren. He will be dearly missed. Donald entered his heavenly home on Friday, September 25, 2015, in Marshall, Minnesota, two days after his 80th birthday. Blessed be his memory. Donald is survived by his wife, Kathy Coudron of Marshall; children, Timothy (and girlfriend, Mary) Coudron of Montgomery, Beverly Coudron of Montevideo, Susan (and Gerardo) Limones of Renville; 10 grandchildren, KaCee, Justine, Jonathan, Jose, Tony, Angelica (and Dean), Alma, Kristaffer (and Karina), Marisol, Jonathon; 6 great-grandchildren; sister, MaryAnn (and Don) Kor of Marshall; nephews, nieces, other relatives and many friends. He was preceded in death by his parents, Emil and Alma Coudron; son, Martin Coudron; step-son, Richard Garman; grandsons, Alonso Limones and Brandon Limones; son-in-law, Amador Limones; brother, Melvin Coudron; and sisters, Evelyn DeMuth, Alice Schoenberger, and Agnes VanOverbeke. The family invites attendees to the Carlin Hall for a luncheon following the committal service.

Donald E. Coudron, age 80, of Marshall, passed away on Friday, September 25, 2015, at his home in Marshall. Mass of Christian Burial is 10:30 AM Tuesday, September 29, 2015 at Holy Redeemer Catholic Church in Marshall. Interment will follow... View Obituary & Service Information

The family of Donald E. Coudron created this Life Tributes page to make it easy to share your memories.

Send flowers to the Coudron family.