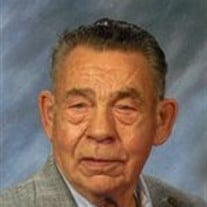 Donald Dietz, age 88, of Marshall, passed away Tuesday, June 23, 2009 at the Minneota Manor Health Care Center. Memorial Services at 11:00 AM on Saturday, June 27, 2009, at Winnebago Methodist Church in Winnebago. Burial will be in Rosehill Cemetery, Winnebago, Minnesota. Visitation will be held in Marshall, at the Boulder Estates Care Center, on Friday, June 26, from 2 to 3 P.M. in the Quarry on the 2nd floor. A prayer service is scheduled for 3:00. Donald Dietz was born on October 22, 1920 in Winnebago, Minnesota, to parents, Matthew and Lila (Robertson) Dietz. He was baptized in the Methodist Church in Fairmont. Don was married to Margaret Tevebaugh on May 11, 1941 in Garden City, Minnesota. He worked as a delivery man for agriculture produce before serving his country in the Army during World War II. Upon his return, he went to work for Watkins as a salesman for spices, extracts, and other food items. He enjoyed that job for 60 years, a true salesman right up until his death. Don was a member of the VFW, American Legion, DAV, Odd Fellows - Winnebago City No. 30., and Rebekahs - Starlight No. 11. His enjoyments in life included gardening, being outdoors, fishing, bowling, and spending time with family and friends. Donald passed away on June 23, 2009, at the age of 88 years, 8 months, and 1 day. Donald in survived by four daughters, Jean (and Roy) Beasley of Virginia Beach, VA, Donna (and Wayne) Smith of Marshall, Charleen (and Bill) Smith of Tempe, AZ, and Pat Dietz of Marshall; eight grandchildren, Debbie Stevenson, Randy Beasley, Shawn Beasley, Stacy Jorgensen, Scott Norrander, Sheila Sanders, Audra Masche, and Chad Dietz; twelve great-grandchildren; one great-great-grandchild; and sisters, Delores (and Darrrell) Plumhoff of Fairmont and Carol Prather of Langley, VA. He was preceded in death by his son, Ronald; parents, Matthew and Lila; wife, Margaret Dietz; former wife, Mary Ann Lee-Dietz; and three brothers, Richard, Robert, and Jerry. Blessed be the memory of Donald Dietz.

Donald Dietz, age 88, of Marshall, passed away Tuesday, June 23, 2009 at the Minneota Manor Health Care Center. Memorial Services at 11:00 AM on Saturday, June 27, 2009, at Winnebago Methodist Church in Winnebago. Burial will be in Rosehill... View Obituary & Service Information

The family of Donald Raymond Dietz created this Life Tributes page to make it easy to share your memories.

Send flowers to the Dietz family.