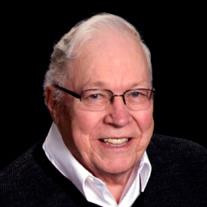 Donald E. Otterson of Brookings, S.D., longtime resident of Marshall, Minn., died Thursday, April 26, at the Brookings Health System hospital after a long struggle with diabetes and heart disease. He was 82. Funeral services are scheduled at 10:30 a.m. on Tuesday, May 8, at St. Stephen Lutheran Church in Marshall with private burial later at the Marshall Cemetery. Visitation will be held from 4 to 6:30 p.m. on Monday, May 7, at Hamilton Funeral Home in Marshall. Visitation will continue one hour prior to the service on Tuesday, at the church. Donald E. Otterson was born March 27, 1936, in Winnebago, Minn., to Ormand H. and Vivian Gale (Peterson) Otterson. He was baptized and confirmed at the Methodist church in Winnebago and attended public schools there. He participated in football, basketball, track and field, and baseball, and he played the stage manager lead role in “Our Town,” the all-school play. He graduated with the class of 1954. He enrolled at then-Iowa State College in Ames with dreams of becoming a civil engineer and transferred to then-Mankato State College to pursue a developing interest in industrial education and coaching. Between higher education terms, he received an invitation to join the U.S. Army and served in a military intelligence unit in Germany from 1959 to 1961. About six weeks after his honorable discharge, he was united in marriage to Carlene L. Grewe on July 8, 1961, at St. Peter’s Lutheran Church of Moltke Township, near Gibbon, Minn. The two met in an industrial arts class at Mankato State, and Don proposed marriage from Germany. His father served as proxy, purchasing the ring from a local jeweler and delivering it on his behalf. Don completed his student teaching requirements in Marshall and finished his bachelor of science degree in 1965. He was hired as an industrial arts teacher, head track coach and assistant football coach at Redwood Falls, finishing his coaching run there with a District 10 track championship in 1968. The Ottersons moved back to Marshall that August where he taught metal shop, welding and plastics. Don was hired as head boys’ track and field coach and a B-squad football coach. He completed his master of science from Mankato State in 1972. Don later was appointed head boys’ cross country coach and started the girls’ cross country program in 1975. Marshall won an unprecedented four consecutive Southwest Conference boys’ track championships in the mid-1970s and a surprise conference title in cross country in 1976. He was named the District 9 Coach of the Year in 1973 before Marshall moved up a class, and he was named Region 2AA Coach of the Year in 1978. After leaving teaching, Don worked as a sales associate for Sears, a GED instructor at the Lyon County jail and the “furniture fixer” at Larson’s Home Furnishings before his retirement in 1998. Don happily led the Marshall Senior Woodworkers for nearly 30 years. He enjoyed watching football, reading and playing cards, especially in recent years at the Adult Community Center. He also relished catch-up conversations with his former track athletes and many years of attending the Howard Wood Relays with Tom Labat, a middle-distance runner from the great Tiger teams. Don is survived by: son Bob (Lisa) of Brookings; daughter Jill (Karl) Maurer of Chippewa Falls, Wis.; three grandsons; three granddaughters; a great-grandson he never met; sisters-in-law and their husbands, Diane (Dick) Isakson and Judy (Gary) Schafer, both of Gibbon; step-brother Gary (LaVonne) Claude of Lakeville; step-sister Diana (Stuart) Eickelberg of Lake City; and several cousins. He was preceded in death by Carlene, his self-described one true love and wife of 55-plus years; his elder brother, Bob; his parents, Ormand and Vivian; Carlene’s parents, Edwin and Irene Grewe of Gibbon; and his aunts and uncles.

Donald E. Otterson of Brookings, S.D., longtime resident of Marshall, Minn., died Thursday, April 26, at the Brookings Health System hospital after a long struggle with diabetes and heart disease. He was 82. Funeral services are scheduled at... View Obituary & Service Information

The family of Donald Edward Otterson created this Life Tributes page to make it easy to share your memories.

Send flowers to the Otterson family.